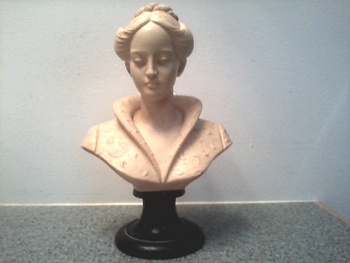 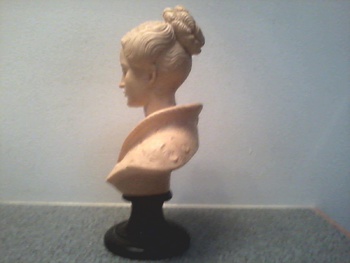 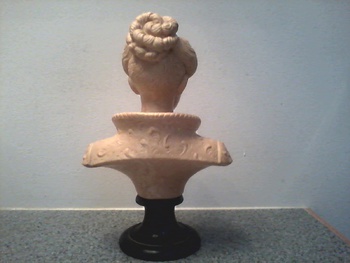 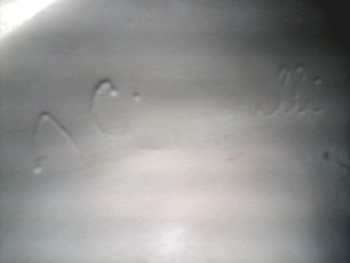 I had been looking at this for over two months every time I went to the Goodwill near Cleveland. It was just so amazing in detail and quality. I didn't see any signature so I had them put it back in their showcase. There was a silly little elephant figure by the same artist that was clearly marked and they wanted forty-five dollars for it and it's just the top part of a larger piece ! I found that out researching this one. This was half the price so I bought it this time. They obviously didn't see the signature. Neither did I till I got it in the bright sunlight. It's very faint and the middle is completely gone, but it's A. Giannelli ! I found the piece online, but the prices vary widely. This is the one that shows up the least too. She's really exquisite and heavy with no damage. She's 9 1/2" tall by 6" wide and sits on a black stone pedestal. The bust is finished in a warm aged ivory color. Most of the pieces have a date (1960,70,80) below his name. This one does not .So maybe it's even earlier. I don't know.You can actually still buy this piece new, but it's in pure white stone with a white polished marble pedestal. Not nearly as nice looking. Their website has PDFs of their catalogs. Just really beautiful works of art. No prices listed unless you order. I guess if you have to ask you can't afford it....lol -Mike-

The pieces that the factory produced originally and today, are in recomposed stone, a mixture of alabaster and marble powder and resin .The result is the weight, texture and coolness of alabaster.
The activity of the factory Egregia starts in Volterra, a city of Italy, in Tuscany, of considerable historic and cultural interest, famous for the alabaster manufacture
The original models of the sculptures have been made by Cav. Arnaldo Giannelli, founder of the firm.
Born in Volterra, Italy in 1907, Arnoldo Giannelli was a keen student of sculpture from the age of 10. He graduated from the Royal School of Art in 1924 and achieved the accolade of "Master" at the Nardoni Workshops. In 1944 he opened his own studio, with work consisting mainly of commissions from the Allied Forces.
For his professional achievements, he was awarded the title of "Cavaliere" in 1970 the Italian equivalent of a Knighthood.
The artist, Arnoldo Giannelli, was an Italian master sculpture and the president of the "Alabaster Craftsman Guild" from 1953 until 1961, his most famous pieces are a bust of Dwight D. Eisenhower and a three meter high totem for Boston University. This is truly a masterpiece by a master sculpture