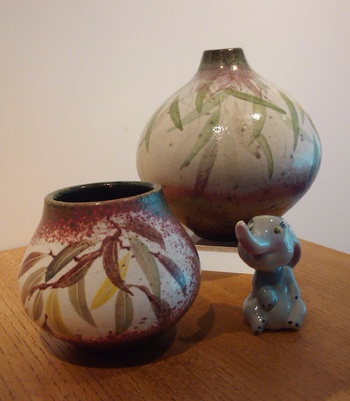 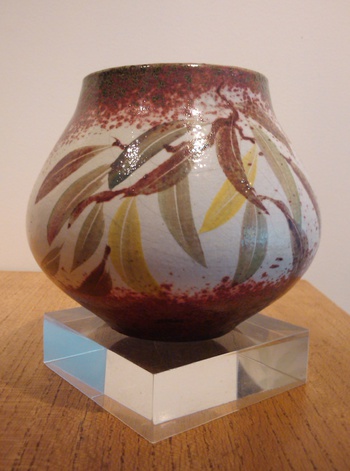 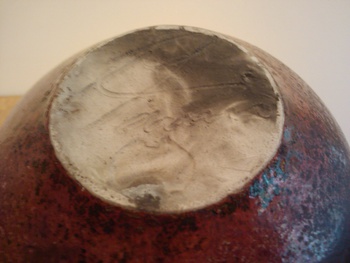 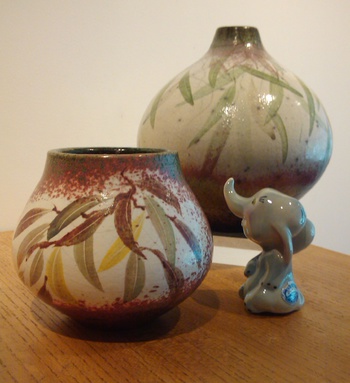 Three days ago I was lucky to find another Raku pot by Peter Harris. I now have two. It was a different profile that caught my eye this morning behind some other vases on a shelf. The gum leaves looked familiar too.

The other larger vase is also on CW posted a couple of years ago.

This vase is just 11cm high and just a bid wider at 12cm. The signature is the same incised 'PHarris' with the P and H entwined but in this case there is also an impressed map of Australia. Love the lustre reds and greens.

"Peter Harris is a self-taught South Australian potter with a background in painting. He became interested in making pottery in 1975, first making terracotta garden pots then decorative stoneware and porcelain. His wife Carolanne Wasley was teaching the craft certificate course in ceramics at Clare TAFE and had set up the Halsbury Pottery, where they exhibited together. He was inspired by a Jeff Mincham workshop in 1982 to specialise in raku. In 1985, he set up a studio with potter Sam Keane in Hahndorf. In 1991 he moved to Noosa, in Queensland. In 1994-95 he spent six months travelling through West Africa. He currently maintains a studio in Cooran, QLD, producing sculpture and decorative pottery, teaching visual arts at Gympie TAFE, and painting again. His works are incised 'PHarris' with the P and H entwined."

The little fellow having a look is MCP - an Australian company too! Disneyana in Australia. The MCP Company or Modern Ceramic Products, operated a factory in a suburb of Sydney called Marrickville from 1946 until 1957.