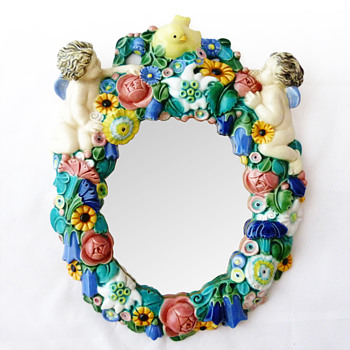 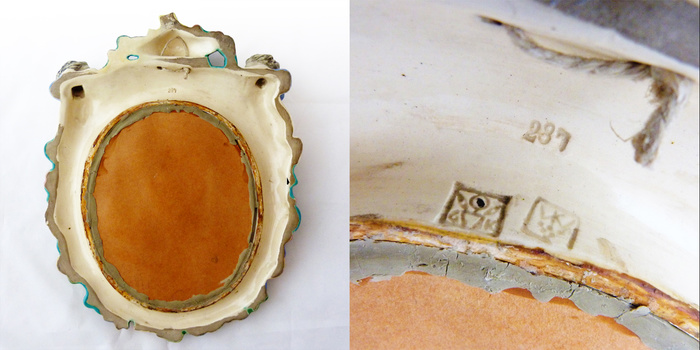 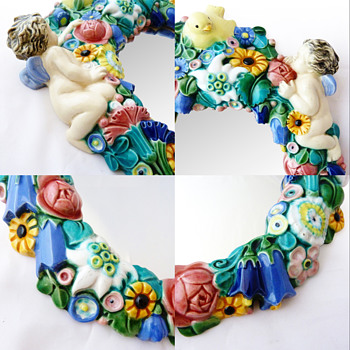 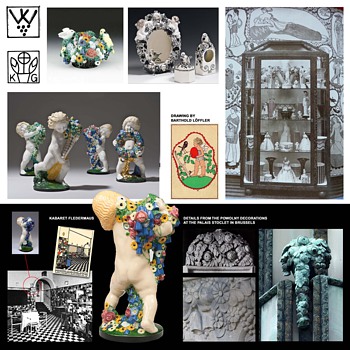 I do believe we have an important piece here, a very important one. This is the mirror frame model No. 287 of the Wiener Keramik company and although it was originally designed in 1910, it was made circa 1913 (according to the monograms). It was distributed through the Wiener Werkstätte.

The Wiener Keramik was created by Michael Powolny and Barthold Löffler in 1906. Both of them were already collaborating for some time with Josef Hoffmann in several of his greatest works (Palais Stoclet, Kabaret Fledermaus, Villa Primavesi…), providing sculptures, reliefs, bronzes... and of course ceramics (like those for the Kabaret Fledermaus).

In 1907, the Wiener Werkstätte buys the Wiener Keramik models to be sold at the WW stores as well as to be distributed.

In 1912, the Spring Exhibition at the Austrian Museum for Art and Industry (nowadays known as the MAK) was to be found a whole room designed by Löffler that displays the ceramics desihned by both Löffler and Powolny. Also in 1912, Wiener Keramik joins Gmunder Keramik in order to be able to produce an increasingly demanded production.

Due to the increasing popularity of their ceramics, from 1914 many designers from the Wiener Werkstätte started creating for them, and the Wiener Werkstatte founded its own ceramics workshops in 1916.
In 1919, Wiener Keramik disappears and only Gmunder Keramik remains, still producing the popular Powolny designs (although it seems the colours are not as bright as in the original production).
This mirror frame, just like many other designs, were first produced in colour (displaying a whole range of bright, bold colours contrasting with each other) and a later black & white version, following the fashion for black & white created by Josef Hoffmann, was issued. This black & white versions were sold cheaper than those in colour.

The geometrical flower motif comes directly from Gustav Klimt’s cascades of flowers in both figures and backgrounds as well as from the reliefs at both the cupola, façade and the access corridor of the Palais Stoclet. As symbols, they talk us about VER SACRUM, the Sacred Spring of the Vienesse Sezession movement. Their being geometrical a symbol of differentiation from the organic/flowery Art Nouveau style as well as a search of their own language.
This obsession for architectural and geometrical “stone gardens” as an opposition to the merely natural, will have a huge influence in the French Art Déco of the 1920s.

The “Putto” motif, boy or angel, is essential in Powolny’s work and he repeats it constantly linked to the four seasons subject. Both the angels (putti) and the singing bird, just like the geometrical garland, insist on the he symbolic rennaisance of a Sacred Spring of Arts.

On pic 2 you can see the back of the frame and a detail of the signature. You can see the production number 287 as well as the monograms for the Wiener Keramik and Gmunder Keramik. As they joined in 1912, we believe this mirror frame comes from around 1913.

On pic 3 there are four details of the frame, where you can see in detail the flowers, the bird and the two putti.

On pic 4 you can see a collage of images showing a few of the ceramic works of Powolny and Löffler displaying putti and birds and flowers, a drawing by Löffler with the same elements and you can see one of the mirror frames made in black & white. At the right top you can see a photograph of the 1912 room designed by Löffler. At the bottom of the collage you can see some images of parts of the Palais Stoclet they designed as well as a photograph of the Kabaret Fledermaus where one of Powolny’s putti can be seen. A Wiener Werkstätte postcard will give you an idea of the colourful interiors of the Fledermaus. All the ceramics used there were designed by Powolny and Löffler.