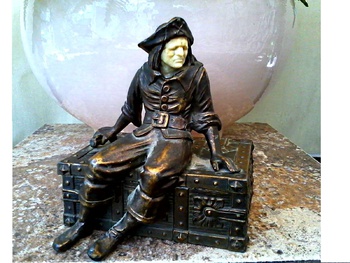 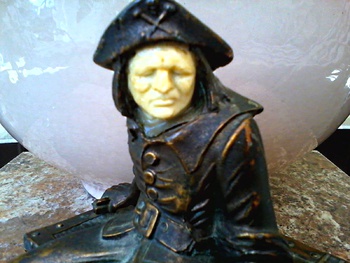 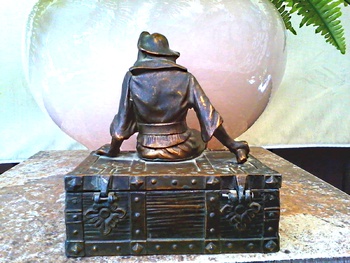 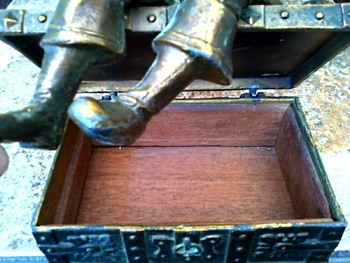 Oh boy, this was a budget buster but I simply could not leave it behind ! It's a bookend actually and made by the J.B. Hirsch Foundry around 1932. It's made of spelter or French bronze which is zinc and a few other metals in the formula. Very heavy stuff !! It's been cold painted to look like bronze. His face is Ivorine which is celluloid, an early form of plastic. Real ivory had been banned by the early 1930's. It would have been one of a pair there is also a female pirate bookend. There appears to be several finishes and styles. Some are painted in colors and others have silver chests and bronze figures or marble bases and just the figure. This one is all bronze color and may have had a felt on the bottom which is gone . The interior of the chest is lined with cedar. I didn't realize it was a box until the clerk at GW took it out of the case. It was incredibly heavy at least five pounds and measuring 6 1/2" tall x 5 1/2" long x 3 1/2 wide . It had "as is" written on it because one of the hinge pins was missing and being held together by a twisted paper clip. I put a brass nail in it and clipped it to size when I got home. The other side has it's thin tiny loop broken on the lid so a pin can no longer hold it in place. So one side is fine and the other is broken. A great find even with the small amount of damage. Now I have to find the other one so I can have a pair ! -Mike-

The JB Hirsch story begins in 1907 with the New York Art Bronze Works in Manhattan’s lower east side. The founder of the company, Romanian metalsmith, Joseph B. Hirsch, began importing pieces directly from French foundries. Around that period, foundries with close ties to the talented artists and sculptors of the Ecole des Beaux Arts in Paris, began producing their now famous works in “French Bronze.” Some of the finest talent throughout Europe trained at the Ecole des Beaux Arts, exhibiting their works at the Salon de Artistes and other great Salons in Paris, the center of the art world.
Between the wars, during the 1920s and 1930s, an entirely new modern style of decorative art emerged, using a combination of bronze and ivory. With the ban of ivory in the early 1930s, ivorine or celluloid (predecessor of plastic) was used in its place. The ivory or ivorine representing exposed flesh and the bronze or spelter representing clothing. The combination of “French Bronze” (spelter) and ivory or ivorine were fully exploited during the Deco period using events of discovery (opening of King Tut’s Tomb in the 1920s), celebrities, athletes (1936 Olympics), children, the fashions and costumes of the period by Erte and Gerdago, and dancers from the Ballet Russe,
After World War I, when the French occupation closed one of Hirsch’s primary suppliers, he went to Paris and purchased that company’s molds to begin his own casting foundry. With the acquisitions of additional molds from French, German and Italian foundries, Hirsch was able to put together the finest and rarest collection of Beaux Arts, Nouveau and Deco sculptural molds in the world.
During World War II, the French foundries were again prohibited from using metal for statues. To prevent the valuable sculptural art from being destroyed by marauding armies, the molds were broken up, the pieces scattered, buried under factory floors, and hidden in house cellars. Most French foundries remained closed after World War II, and the molds remained hidden.
In 1948, J.B. Hirsch’s son, Abraham, heard of their existence, and planned “archaeological expeditions” to France to search for the buried mold fragments. Between 1948 and 1963 Abraham Hirsch was able to piece together over 200 objects and acquire the molds from 15 “French Bronze” foundries. Abraham’s son, Stanley was put in charge of reassembling exhumed molds that arrived in pieces. After attending a symposium on the Beaux Arts by the NY Metropolitan Museum of Arts, Stanley Hirsch discovered he was in possession of the original molds from which the displayed pieces were cast. Putting together the puzzle of scrambled parts is still an ongoing process.
Today, JB Hirsch bookends -- romantic, elaborate, and elegantly designed -- are the most sought after of all bookend manufacturers. They are usually figural pieces cast in pure spelter (“French bronze”) and usually reflect the chryselephantine movement, displaying ivorine (celluloid) faces, hands and other parts. In some cases, the parts are painted to resemble ivorine.