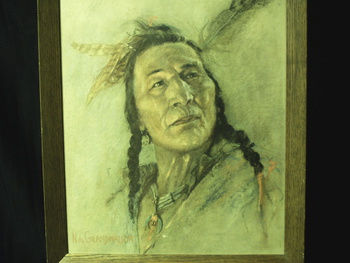 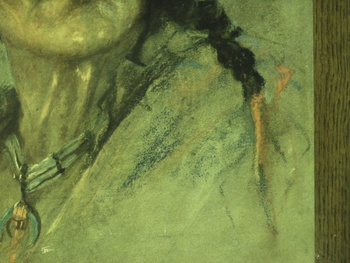 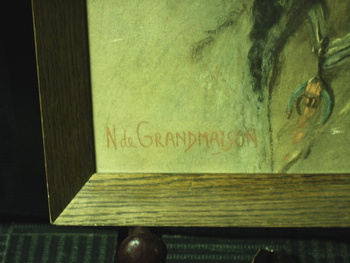 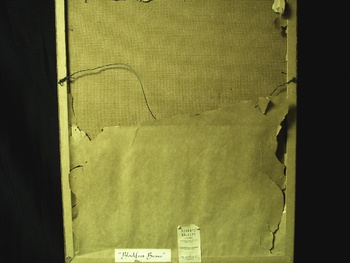 Hi
Everyone.
Here we are, i have this artwork for almost 1 month 1/2, i almost post it, few day's after i found it, i remember chatting with Julie a (CW-member) stay tuned,(i say) i found something really nice(and i think, one a mimute,better to be sure about that), i restraint my enthusiasm until today, because today i have this back from a friend antique dealer, even himself,,, he have to go to the ROM to get this check, and that was it:) month and half later, an original Mix Media (Pastel,Charcaol) by Nicolas De Grandmaison, well know artist, specialized in Native American Indian.
This is obvious, before this artist was granted has master of is art, its seems, he sold some of those, maybe to friend ,when he start painting, pastelling, and watercolor,masonite board was cheap for the artist at the time, cheaper then canvas board, later on, he use hight quality paper and velours paper and those artwork are priceless today, sold for 35K to 50K, now the one i found was on masonite board, at his beginning did few on that kind of support, and the ROM conservator told me,,,, this need to be appraisse for assurance purpose, when my friend ask about the value, i did't know, but he have an ideal, way more then the one on special Paper, for the reason then he not recall seem another one like this,,,,way to go....pay off, all those hours running all over those thrift store try to find the REAL TREASURE, WELL LOOK LIKE I FOUND A PART OF IT.

Nicholas Raffael de Grandmaison was born in Russia on February 24, 1892, into a French and Russian family of noble descent. He was educated in Moscow and studied art, music, languages and history until he entered the military at the age of 19. After being captured as a soldier in the Imperial Army, de Grandmaison spent 4 years in a prisoner of war camp where he turned to art as an alternative from the monotony of confinement. Following the war, de Grandmaison went to England and registered as an artist émigré, favouring art over life as an officer. He studied at St. John’s Wood School of Art in London and owing to his aristocratic upbringing, relied on his charm to gain commissions. In 1923, he arrived in Canada due to connections he had made in England and spent time in Winnipeg working at a printing and engraving firm, while doing portraits mainly of children. His first encounter with First Nations people came in 1930 when he travelled to The Pas in northern Manitoba. Not only did his portraits of this proud race prove to sell, but de Grandmaison, aware of his affinity for the Native community, dedicated himself entirely to recording them throughout his artistic career. De Grandmaison ventured west into Alberta where he encountered Blackfoot, Sarcee, Peigan, Stoney, and Blood Tribes. De Grandmaison regarded the Plains Indians as the aristocrats of North America and through his romantic vision saw in their weathered features, a strength he wished to preserve. The artist would paint such iconic figures as High Eagle, the last warrior from the Battle of Little Big Horn. De Grandmaison preferred pastels to oil and favoured a type of sandpaper imported from France that was smooth on one side and rough on the other. Since he was usually on the move in search of his subjects, he stored pastels a tin box and carried cherished pieces of his oeuvre with him in a thick portfolio. The artist and his family moved to Banff in 1940. Elected into the Royal Canadian Academy in 1942, de Grandmaison was recognized for his achievements. In 1959, he was inducted as an honorary member of the Peigan Nation; a testament of his lifetime mission to depict the First Nations people of western Canada, and was awarded The Order of Canada in 1972. Nicholas de Grandmaison died in Calgary on March 23, 1978, and was buried in the Peigan Reserve where he had been made an Honorary Chief and given the name “Enuk-sapop” or Little Plume. His legacy of portraiture executed in a realist style demonstrates an immediacy which allows the viewer to witness a race that was threatened. De Grandmaison’s work remains a permanent part of Canadian art history.