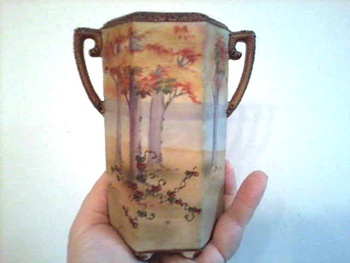 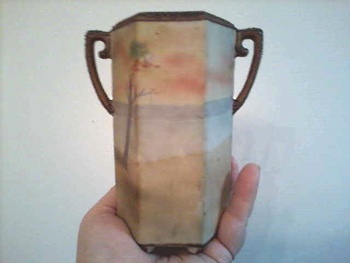 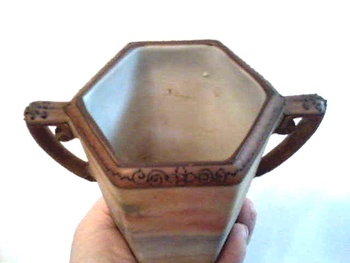 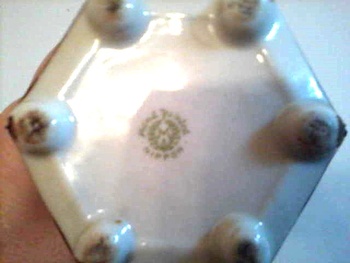 I was finally able to get this wonderful little hexagon Nippon vase this morning to add to my collection. Hand painted with a beautiful fall scene it was probably created in the early 20th century (1911-1920).
The mark is #47 in Van Patten's ABC's of Collecting Nippon book. The "M" in the wreath stands for Morimura Bros. who were the importers. They imported plates, match holders and vases of all kinds. which were subcontracted to decorating firms in Tokyo, Nagoya and Kyoto. The quality of the Early Noritake wares varied with the skill of the individual decorators. The early marks from this period seems to have been the country of origin i.e " Ni hon" or "Nippon" written by brush in traditional Japanese Kanji characters. The word "Nippon " also meaning Japan was written in western characters with"hand painted" and the company stamp mark on exported pieces. This piece is in perfect condition too. -Mike-

Most early pieces marked Nippon in western or in Japanese Kanji characters seems to have been manufactured by or sold through the company that later would become Noritake Company.
In 1876 Baron Ichizaemon Morimura IV formed a trading company called Morimura Kumi (Morimura Brothers) with offices in Tokyo, and a retail and wholesale office in New York for the export of traditional Japanese products such as chinaware, curios, paper lanterns and other gift items. Ichizaemon Morimura VI was a visionary and a supporter of a modernization of Japan. One thing he clearly saw was the business potential if the quality of Japanese art and skilled craft could be adapted to the needs and taste of the American consumer. Morimura brothers was still a many faceted importing company of which the porcelain were just one part.
Beside running a china decorating facility of their own during 1878 to 1884, the Morimura brothers also bought and distributed porcelain blanks to be decorated by independent porcelain decorators in nearby regions. From 1884 Morimura Kumi subcontracted decorating firms in Tokyo, Nagoya and Kyoto. The quality of the Early Noritake wares varied with the skill of the individual decorators. The early marks from this period seems to have been the country of origin i.e Ni hon or "Nippon" written by brush in traditional Japanese Kanji characters. The word "Nippon " also meaning Japan but in western characters.
A visit by Ichizaemon Morimura IV to the World Fair in Paris in this period helped shape the idea of trying to manufacture a high quality, modern, western style dinnerware for export, in Japan. In January 1, 1904 the Nippon Toki Kaisha Ltd - the forerunner to the present Noritake Company - was formed. The factory was located near a source of good and plentiful raw materials and in a community rich with skilled potters. The site was the small village of Noritake near Nagoya, the center of Japan's ceramic production, on the main island of Honshu. The first Japanese registry for a Noritake back stamp is reported as 1908 for use in Japan.
In 1910 the first china products from the new company could leave Japan for the U.S. The first reported U.S. registry for a Noritake back stamp for importing is 1911. Not not until 1914 after a long series of trials and errors the first fine porcelain dinnerware suitable for export was produced. On of the first patterns to be produces was the "Sedan" (11292). A piece of the dinnerware in the Noritake factory in Nagoya shows this to be a bleak white plate with a cream border of small flower sprays and the typical Noritake back stamp, the letter "M" in a wreath and the words "Hand painted." As a general rule the earliest dinnerware plates were mostly decorated with a liberal applications of gold. To identify the early Noritake porcelain, it is important to remember their intended adaptation to the western taste. The "M in a wreath" mark was used between c 1914 until 1940.