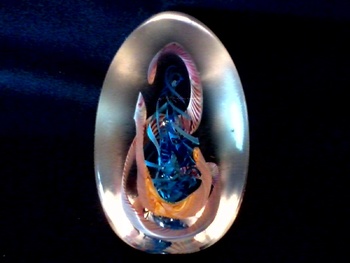 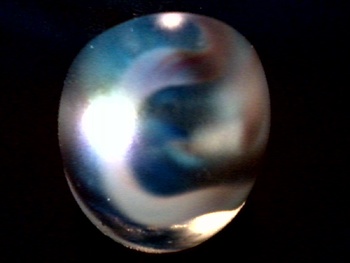 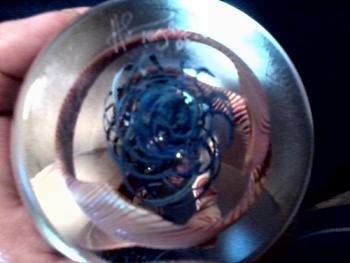 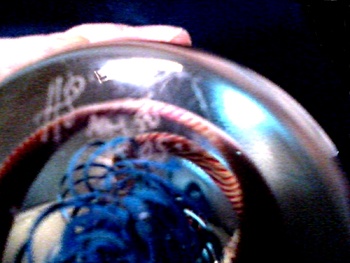 Here's another nice paperweight for my collection from Volunteer's of America. The lady from production was putting things out and this magically appeared on my second pass through the glass aisle. The signature is almost invisible unless viewed at just the right angle and in good light. I didn't even see it till I got home. I quick check on Ebay for a similar ones confirmed the signature. It's marked H.S. in a script monogram with May... 90 with the numbers 05-08. Henry Summa 's helix designs are an interesting use of ribbons and spirals of glass in a 4 1/2" cut away egg shape. The back side has a satin iridescent finish. Sadly Mr. Summa passed away from cancer in 2008 at the age of 59 . -Mike-

Henry Summa has been working in glass since 1972. His early training in the glass arts was based on an apprenticeship at Glory Hole Glassworks in New Mexico. This apprenticeship emphasized creating and production of traditional and functional vessel forms. Summa built his first studio in New York near Woodstock. After 2 years he moved his studio to his present location behind his home in New Mexico. Over the last few years he has found his work growing away from functional forms into more sculptural and complex designs. Summa does extensive cutting, polishing and assembly after the cooling process. Many of his pieces include glass cane and murrini that he has personally made to add more interest and individuality to his designs. Summa has developed a series of faceted sculptures and paperweights, platters and vessels. He has developed a consistent following of collectors for his work.