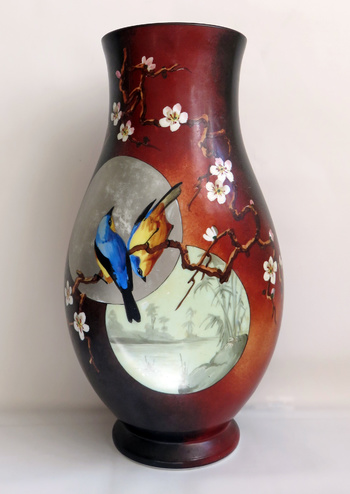 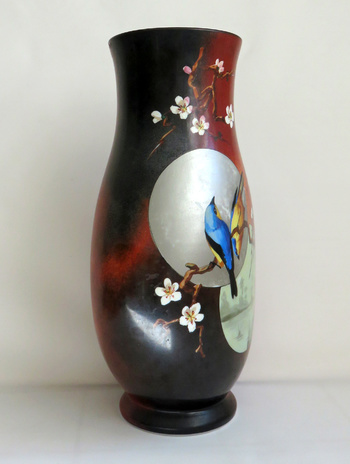 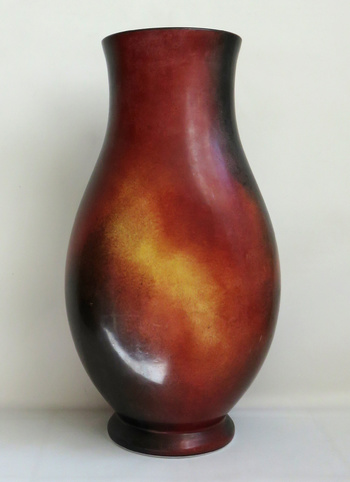 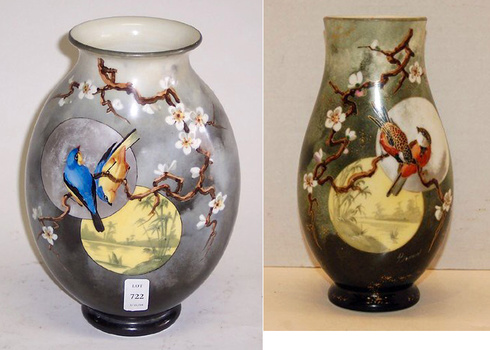 This large opaline glass vase was made by the Compagnie des Verreries et Cristalleries de Baccarat, in the Japonisme style that was very popular in Europe from about 1870-1900. The vase dates to c.1880, measures 12” tall, and is in excellent condition with slight wear to the silver of the moon; it is unsigned, as many Baccarat pieces were. In the course of researching this vase, I have found several signed Baccarat examples in the same shape as this vase, and also several signed vases in different forms, but in the same décor. A pair of these Baccarat vases can also be seen at the Corning Museum of Glass (CMOG), which also includes a good explanation of the origins of ‘Japonisme’ in Europe: http://www.cmog.org/artwork/2-vases-japonisme-scenes

The museum listing also states: “The well-established French glass manufacturer Baccarat referenced Japanese woodblock prints in their glass designs, many of which were displayed at the Paris International Expositions in 1867 and 1878. Baccarat was one of the first French glass companies to produce glass in the Japoniste style.”

I found this vase, unidentified, early in the summer, and have spent the last several months on and off researching who could have made it. I have to say that it was not that easy! I came across other examples of vases in the same form and décor as mine (but in varying color schemes) but found all sorts of conflicting attributions, most notably to Mt. Washington and the Smith Bros. I even found one that was attributed as turn of the century Japanese! It was not very common to come across one attributed to Baccarat, and I was so intrigued by who could have actually made my vase. The vase was in what I thought of as the ‘Aesthetic’ style (I later read that Japonisme was a subset of influence within the Aesthetic Movement), and thus searched for glass vases under that term, as well as by possible makers. After finally collecting enough information and images, and seeing enough signed similar examples, I was convinced that my vase was indeed by Baccarat. And then, a few nights ago, I came across the CMOG listing – it was so nice to see it confirmed there. I love solving glass mysteries, and this was a particularly fun one for me. I hope you enjoy the vase.

(Just as a note – the Smith Bros. did make some vases in a similar décor. I have seen signed examples, but they are small vases, typically intended for the use in metal mounts. Also, the birds are depicted in a different manner, especially their tails. If anyone is interested, let me know and I would be happy to point out the differences I have identified between the vases by the two makers.)