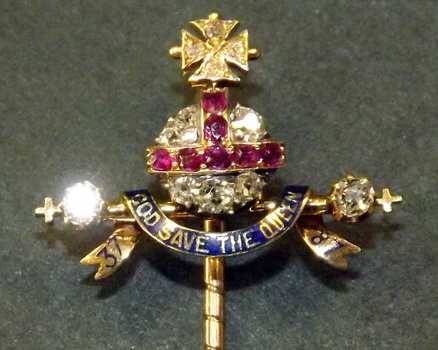 This stick pin belonged to Queen Victoria, who on the day of her Golden Jubilee in 1887 during a quieter moment in the celebrations gathered her immediate family (her children) and gave; jubilee brooches for her daughters, and pins to her sons - this particular one was intended for Prince Leopold, but as he passed before, this stick pin was given to his son, Prince Charles Edward, who was Queen Victoria's grandson.

This giving of pins and brooches appears in a notation in Victoria's diary for that particular day in 1887.

Charles Edward though is sent to Germany, as a charge of the Kaiser, and his name changes to Carl Edward Saxe -Coburg-Gotha.

The Prince still in Germany during WW1 is striped of his title.

The little pin has certainly had a journey in life, it was made by the crown jeweler in their London (Haymarket workrooms) and would have taken about 40 hours (estimated) to create, plus time in between for sending to different skilled hands.

It is noted by Royal households and remarked at its beauty in both design and craftsmanship, unrivalled even by today's standards, often drawing comparison to the Coronation ring that forms part of the crown jewel collection.

The symbolism of an orb and scepter, and there's a few definitions out there, but the orb to the holder represents the saviour of the world, and the scepter represents authority... thus the two are sovereign pieces of an empire.. this just happens to be the "lite" version of the real ones!

It is made of gold has 13 diamonds and 7 rubies. It is a very exquisite 6,5cms long pin, the central piece about the size of a thumb nail, and is of great beauty in its intricacy of design.

The pin has not been seen by the public for what must be well over 100 years, it has been studied by specialists here in London, and quite rightly as we are tailors and tie makers, a stick pin should be held by us.