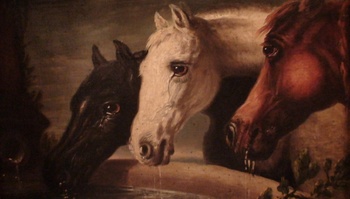 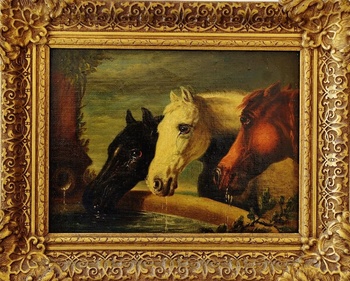 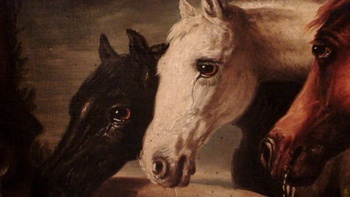 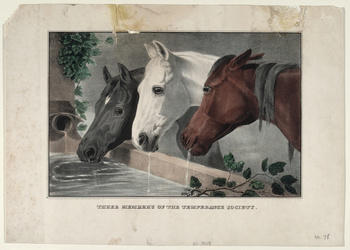 Painting is in the manner of John Frederick Herring (1795-1865). English in origin and dates 19C. Unsigned. The painting is on canvas board and framed in an antique wood frame. This painting came from an estate in Canterbury England.

Oil painting on canvas, 'Three Members of the Temperance Society':Three horses at a Drinking Trough by John Frederick Herring the elder (Surrey 1795 – Royal Tonbridge Wells 1865), 1847-1870. A variant copy of a painting by John Herring the elder, 1847, in reverse, at the Tate Britain, London. Three closely grouped horses heads, chestnut, grey, and black, seen looking left take water from a trough.

Thanks to Keramikos for the following from the internet regarding a color print (last photo):

Color print of the heads of three horses drinking at a water trough. The horse on the far left has his mouth in the water. The two horses on the right have raised their heads, and water drips from their mouths in a thin stream. Water flows into the trough from a stone or clay pipe on the left. A vine is on the left and a branch with leaves is in the right foreground.
The print is a copy based on an 1847 painting by John Frederick Herring Sr., which hangs in the Tate Gallery. The original painting was so popular that it was widely reproduced as a print (lithographs and engravings). The Kellogg version may have been inspired by the "Cold Water Army" a children's group who pledged to drink large quantities of cold water instead of alcohol and who were sponsored by the Connecticut Temperance Society, which was based in Hartford with the Kelloggs'. The image is also known to have been used as a basis for the children's story about the dangers of consuming alcohol and by 1917, the image was promoted as a picture for use "in schools and for schoolroom decoration."
This print was produced by lithographer Elijah Chapman Kellogg (1811-1881). He was the youngest of the four Kellogg brothers, all of whom were lithographers. The brothers were born in Tolland, Connecticut, a small town located near where the family business was established in Hartford. E.C. Kellogg was the only brother among the Kelloggs to receive his professional training in Hartford. In 1840, Elijah Chapman Kellogg, along with his brother Edmund Burke Kellogg (1809-1872), took over the D. W. Kellogg & Co. after Daniel Wright Kellogg (1807-1874), its founder, moved west. Elijah and Edmund Kellogg were responsible for most of the company’s future partnerships. Elijah Chapman Kellogg retired in 1867.