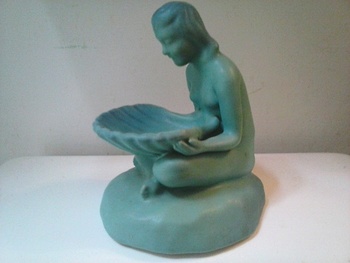 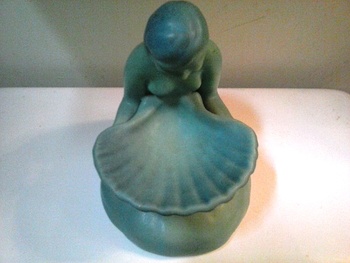 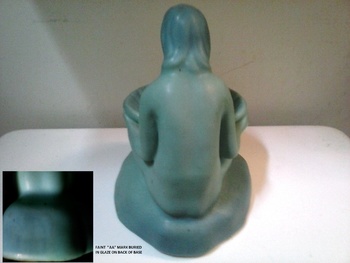 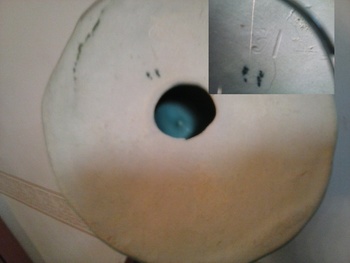 TA DAH !!...It's finally here. My 1000th post. I've been deleting old posts and stalling long enough. Today Savers provided me with this totally unexpected surprise. I found this little lady in the bath accessories. I figured hmmm...nice soap dish but just a bit too nice. Looks more like Deco art pottery to me. Could be that it's something good. There's no marks but the price was right. I'll take it home and research it. I never in a million years was thinking Van Briggle !! The image searches pulled up a few in different colors. Persian Rose and Moonglo (white). Only one like this in a shaded color glaze called "Ming Blue". There's a few subtle blue highlights called "overspray" mostly in her hair and around the edge of the shell. The Van Briggle "AA" window mark (Artis and Ana) is there buried in the thick matte glaze on the back of the base. Just a faint shadow in the right light is all you can see. Knowing exactly were to look was the key. A few random marks on the bottom an incised "31" (the year ?) and two blue marks called "glazer" marks. Speaking of glaze I find it odd they they would put a hole in the bottom to glaze the interior and not the bottom. What would be the point ? Waterproofing for garden use...maybe. Say a bird bath. It might take a bit more research to fill in all the blanks such as the shape number, but I'll find it eventually. She's a beauty !! -Mike-

In 1899, when Artus Van Briggle stepped off the train in Colorado Springs he must have felt worlds away from the studios of Paris and the landscapes of Italy where his extraordinary talents had so recently flourished. Here, however, surrounded by the beauty of the Rocky Mountains, the defining moments of his life would occur; the twin destinies of a great artistic triumph and an imminent personal tragedy would unfold, leaving in their wake the dawn of a 100 year artistic legacy
Artus Van Briggle, an American artist of Dutch descent, was established as a world class painter in Europe. Having been trained at the finest academies there, and with paintings accepted by the Paris Salon, he received the highest honors for a painter in his day. Yet his artistic passions would ultimate lead him away from his brush, canvas, and easel toward another artistic pursuit that would ultimately define his genius.
Though Artus was a brilliant painter, his artistic passions were most eloquently expressed in the forms and colors of one of history’s oldest arts - pottery. From his years as a celebrated artist at the famed Rookwood Pottery in Ohio he knew first-hand the extraordinary range of expression an artist could achieve with the potter’s materials. His pursuit was the creation of exquisite satin matte glazes, like those he’d seen on ancient Chinese masterworks, in a palette of glorious colors, never achieved by any artist in modern times. The materials this brilliant artist would use for his greatest artistic pursuit would be minerals from the earth - clays, feldspars, oxides, - and the glowing orange flames of a fiery kiln. When transformed by the creative mind and the skilled hand these materials become the essence of both humanity and nature blended in unity. Clay and glaze are indeed extravagant media, offering the artist a lifetime of challenges and rewards. Artus, however, didn’t have a lifetime - tragically, he had contracted tuberculosis and, though a relatively young man, his future was uncertain.
Artus had achieved some success in discovering a formula for these beautiful matte glazes prior to his arrival in Colorado but he continued his work there, seeking a standard of perfection not yet achieved. Pottery is a melding of art and science, and during the time when he conducted his experiments Artus knew success could not come without the patience of a scientist and the passion found in all great artists. He pursued his vision with tireless effort, though the effects of failing health often interrupted his progress. No specific date is recorded, but one day in the spring of 1901 he reached into the kiln, with the anticipation known well by countless potters throughout the ages, and finally held in his hands the perfect, rich, matte-glazed pottery he had sought for so long - the first pieces created in centuries, the first ever on this side of the world. Against the odds of failing health and a pursuit which no western artist had ever achieved, he succeeded; his passion was realized - a lost art was now reborn. The world would once again see and touch of the soft marble-like glazes first known by ancient Chinese masters half a world and so many generations away.
When you hold in your hand a piece of fine artistry and craftsmanship, a human creation with elegant lines and a sensual surface - something experienced by the eyes and hands and ultimately felt by the soul, you’ll know what Artus Van Briggle was seeking - and what he ultimately achieved. He lived to see his artistic passion fulfilled before his own mortality could eclipse his dream. Though the sun setting on his own life, a new era was on the horizon for one of the oldest arts in history.
Once perfected, Artus Van Briggle’s exquisite new glazes graced his elegant Art Nouveau pottery designs which were sent across the Atlantic and, when shown to Europe’s best art judges, were proclaimed, "A supreme discovery in modern ceramics." Soon, art critics across the continents marveled at his works, lavished him with praise, and brought international acclaim to this quiet American artist on the Colorado frontier.
Before long, he succumbed to tuberculosis and died there in the shadow of the Rocky Mountains, but not before receiving word that when shown at Exhibitions here in the United States and in the Salons of Europe, his creations had won their highest awards.
Van Briggle Pottery is the living heritage of an extraordinary artist whose heart and hands were given only half a lifetime, and to his wife, Anne, whose own dedication and fine artistry after Artus’ death carried their vision to success in its earliest years. Together they left a timeless and permanent imprint on the tradition of American art pottery. With each passing year and with each new piece created, their artistic legacy continues, a legacy in known as:
Van Briggle - a Tradition in American Art Pottery since 1899.