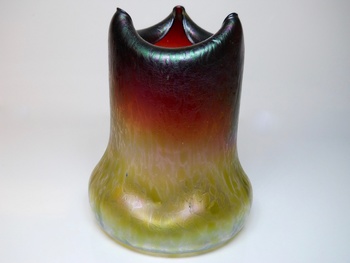 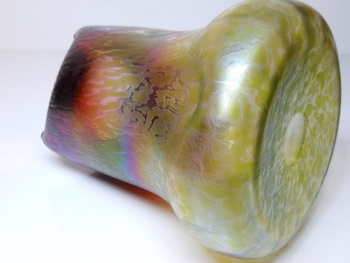 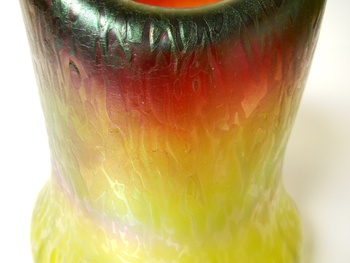 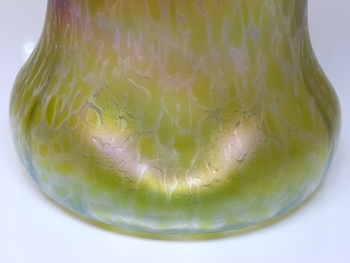 Good Evening CW Members----11:00 PM)2016-5-27
Tonight I realize having a good blood pressure and I am in good physical condition, because when he pull this one out I stay very calm and I am not become trackless, he just say"I believe this one also was Bohemian" I have that one for 10 years but never researching who make it, well maybe I've not collecting glass for long, but I see this one before and I knew who make this kind of glass, also see it many example on auction web site going for quite a bit of cash, I am still in shock while writing this post of how much he ask me for both vase, i just gone say, it's a steel.

This is such a beautiful Rindskopf's, in fabulous condition, i believe the decor of the top part top named "Pepita" the base is "Green Oil spot", the vase is pinch at the base in 2 location and finally the rim is just ingeniously roll inside, this is just an amazing piece to add to my Rindskopf's collection.

Thanks for viewing.
Alan

Josef Rindskopf was born in 1829, and went to America sometime in the middle of the 19th century. He married Fanny Phillips of New York and returned to Teplitz with her sometime around the 1850s or 1860s. At that time, Teplitz was in Bohemia, which was then part of the Austrian Empire.
After 1918 it became part of Czechoslovakia and its name was changed to Teplice.
Teplitz was a spa town of some repute (though not quite as grand as Karlsbad or Marienbad) and a fair number of glass factories developed in the surrounding area. In 1876 Josef Rindskopf was co-owner, with some of his brothers, of the glass company Brüder Rindskopf. The family, a large one, was descended from Josef Rindskopf's father, Beer (1799-1876). Almost all of the family members changed their name to Riethof a hundred or so years ago.
In 1891, a year after his death, four of Josef Rindskopf's sons, Sidney, Albert, Edwin and Sherman (note their American/English names - Sherman was surely named after the American Civil War general) established a new company called Josef Rindskopf's Söhne A.G. (Josef Rindskopf's Sons) at Kosten. Soon after factories at Dux and Tischau (all near Teplitz) were added.
Initially, at Dux, much of the output was coloured blanks that were sent to glass refineries in Haida (Nový Bor) to be finished off (decorated, etched, painted etc).
Within a year or so, however, all Rindskopf's glass was finished off at their own factories. At Dux, new equipment was installed so that etching, painting, sandblasting and so on, could all be carried out on the spot. Iridescent Art Glass, as well as Crackle Glass and Frosted items ("eisglas") were made at Dux. At Tischau, iridescent Art Glass in the fashionable Art Nouveau style was also produced. Much of the output, as with many of the other Bohemian glass factories at the time, was for export.
Josef (1829-1890) and Fanny Rindskopf (see Phillips)
had six children:
Sidney (1859-1940)
Henry (1860-1892)
Albert (1861-1930)
Edwin (1862-1942)
Bertha (1863-1889)
Sherman (1865-1947)