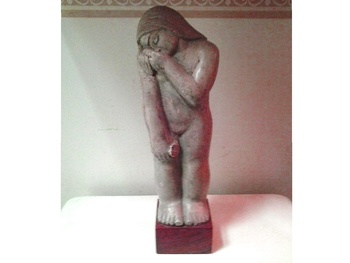 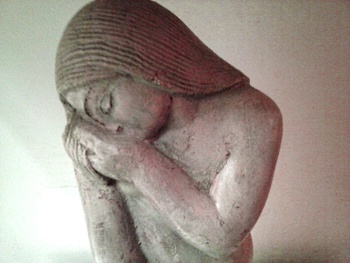 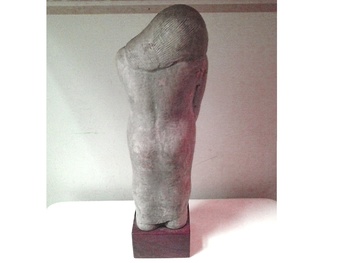 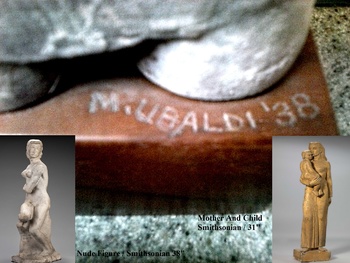 I've not been in the Salvation Army that sells by the pound in a while, so I stopped by this morning. I bypass all the clothes and head straight for the sub-basement area where they keep all the "houseware" items and books. Usually I won't find much of anything but then I spied this rather robust figure. Very stylized with a 30's "Deco" feel and very large feet ! She's 14.5" tall on the wood base and 4.5 " wide at the shoulders. Made of plaster with a pinkish blue grey waxed finish. It was signed on the wood base M.Ubaldi 38'. Mario Ubaldi was born in Monarch, Wyoming in 1912. He studied art in Rome. In the late 1930s, he worked for the Illinois WPA sculpture program. Later he taught at the Art Institute in Chicago and exhibited nationally. He died in 1993. I couldn't find any auction records to try to determine a value, but the Smithsonian has two of his larger sculptures which are not on view at present. So this kind of makes up for the drawing fiasco from my last post. At least I'm fairly sure this isn't a copy. When I got to the register she weighed in at 4 pounds for a grand total of $2.69. Can't argue with that ! -Mike-