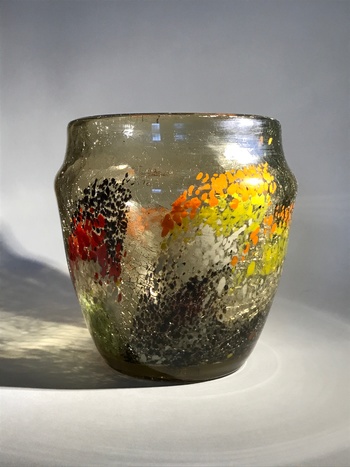 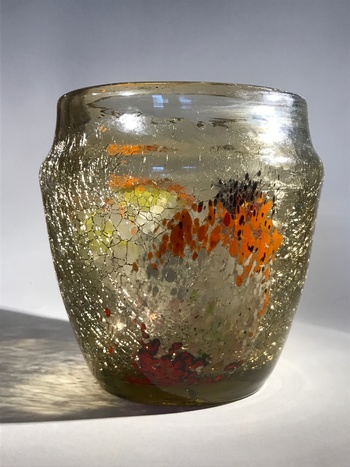 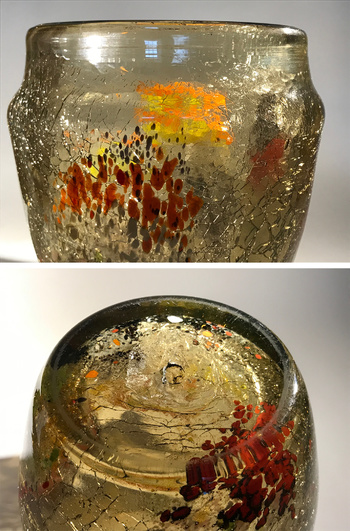 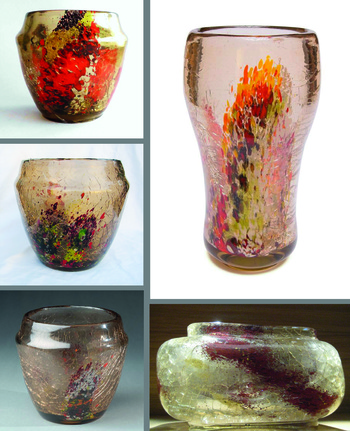 This was a fortunate find. While trawling though Ebay here in the UK, I came across this piece being sold as a "glass planter", for £45 I paused, looked at it for a while, thought to myself 'this is a nice thing' but for some reason passed it by - for over a week! I thought nothing more about it. Then while researching other art glass particularly Harrach, I came across a piece of Leveille Rousseau, a 'Harrach like' fine enameled piece which I really liked.

This piqued my interest. So I delved more deeply into LR and discovered some images of pieces which were similar to something I had recently seen!! I went back to ebay did a quick search and found the vase I had seen the week before. It had not sold and had been re-listed. I couldn't believe my luck, put in my bid - no one watching but me and it was mine in 5 days.

Extremely heavy light-smoked glass, internal crackle and inclusions of orange, yellow, red, green, white and deep purple cased in thick crystal. The thickness of the glass varies, but at a minimum is more than half an inch thick (14mm). 8" (20cm) tall and weighs 9.6 lbs or 4.6kg! This one has a rough pontil. From what I can tell, some pieces like these are polished some not.

---UPDATE----05.09.2018
I originally ID'd this on what I could find on the internet. I originally suggested it was by LR only on what others have said and the attribution some auction houses have given these pieces. Since then and with the input of Dr Kai Haselbach, I have come to the conclusion that it is not LR and suspect these pieces may actually be British, only on the basis that pieces for sale recently have been found in the UK. If anyone has any idea as to maker I would be grateful to hear from you.

Pic 4 shows some other examples, however the only one that is definitively by Leveille Rousseau is the bottom right example.