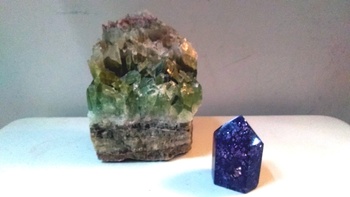 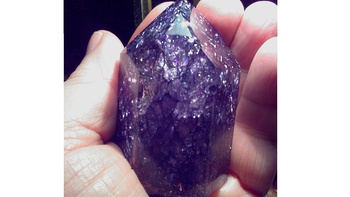 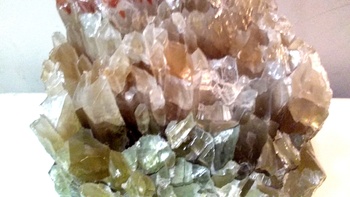 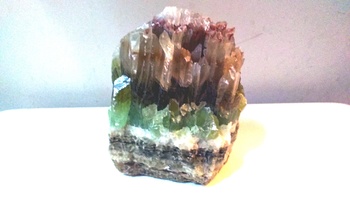 It sure has been a while since I've posted anything but I've been around keeping tabs on everyone and all the great things you've been finding. Just been kind of busy with the everyday ho-hum stuff plus my treasure hunting has been far less productive than it used to be. However, last week I was at the antique store where I have a booth and a young man came in wanting to sell some healing crystals. I know a bit about the theory behind them but really wasn't able to identify any of them. He wanted only five dollars each so I picked the two I thought were the most interesting. He had a piece of geode but it was rather small so I passed. I think they were Amethyst crystals on that piece. The largest piece I did buy was composed of large upright crystals. It kind of reminded me of cathedral spires. Nice green color with even a touch of clear and rose at the tip. It's 6" tall by 4 " across and weights a hefty 4 to 5 lbs. The smaller purple crystal which is 2.5" x 1.5" has been faceted and polished. Really interesting structure. Clear internal crystals with a dark purple netting winding through the whole piece. I have no clue what either of these are. Any rock-hounds out there have a better eye for these than I do ?? -Mike

NOTE: So a bit of research turned up fairly positive ID's on these two specimens. The large green piece is Green Tri-color Apache Calcite. The Small purple point is as I suspected, Amethyst. The crystal clusters are taken from the inside of a geode and then cut and polished to a point. So you get all the sparkle from the little individual crystals through the interior. There can be other trace minerals in there as well such as agate and quartz. You also come across Amethyst spheres also taken from geodes which have the same "cracked ice" look to the interior. -Mike-