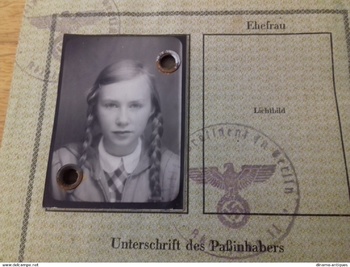 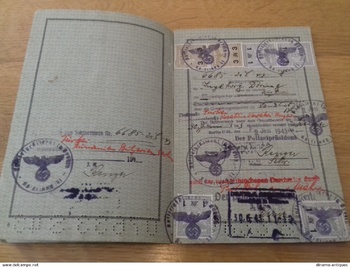 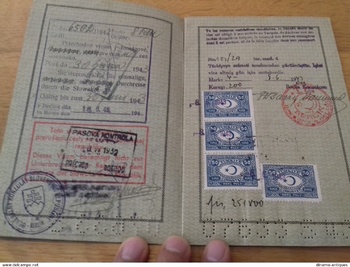 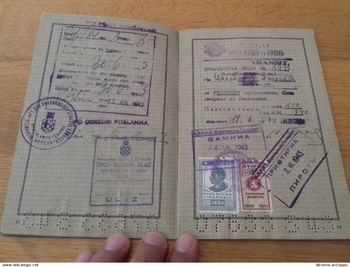 Very nice document of BDM organization girl (Bund-Deutscher-Madel) akin to the HJ (Hitler Jugend for Boys) - daughter of a high ranking NDSAP member (Her father was Hans Doring, an SS Brigadefuhrer-General with the Liebstandarte Adolf Hitler - (his bodyguard) in the Ukraine June 41-May 43) with travel through the occupied puppet governments. It starts off with a German Visa to allow travel to Romania, Serbia, Turkey, Slovakia, Bulgaria, Hungary, and the NDH in June 1943. She has (not pictured) travel authorizations with revenues for the trip in 1943 to NDH, Hungary, and Slovakia. She visited Turkey twice - once in July 1943 - and then again in August 1944 - spending 3 days there and returning to the Reich. There is a 1943 Berlin issued Turkish Consular Visa stamp with related 50 Kurus (4 marks) revenue stamps, Wowser! In the photos above you can see Serbian, NDH, Bulgarian, Turkish and Slovakia transit/visa stamps. Her route of travel from Germany was probably -> B&M/Slovakia >Hungary>NDH>Serbia>Bulgaria all by train! Why this 15-16 yo girl was traveling to Turkey at this time through an unstable Eastern Front is unknown. The passport was issued in June 1943- July 1944, then a 6 month renewal is noted in July 1944-January 1945 (not pictured). On the last page opposite the cover (not pictured) is a paragraph in German issued by an official in Berlin on 8/22/45 requesting the holder to retain this document perhaps as an ID - there is a de-nazified stempel without the eagle with the officials signature. 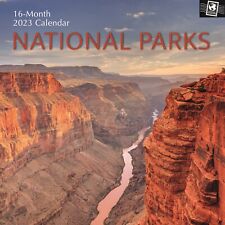 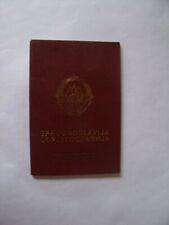