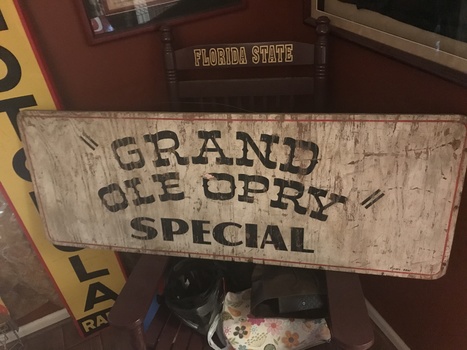 Found this in an antique store In Seveirville Tennessee. Authenticated by Carl Jessee former employee of Tickel Bros. I found Mr Carl on the second phone call I made in researching Tickel Bros. I got his info and called him and sent him a photo and he called me right back and said the sign was painted by Ralph Ford in 1950, He then told me you might not recognize that name but you will recognize his cousins name Tennessee Ernie Ford. He said he worked with Ralph for many years and noticed his style of letters. I am still shocked I have found a piece of Country Music history. I have contacted the Country Music Hall of Fame Museum and their historian is looking through the old photos from the Opry for a picture of it. This is why I never pass a antique store !!! You just never know what you will find. Happy hunting friends !!!.