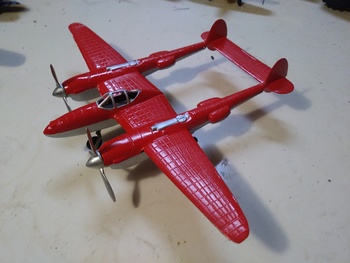 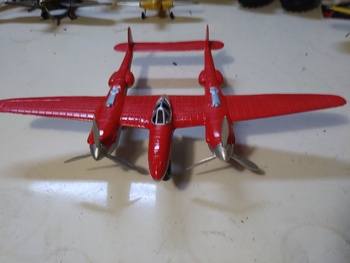 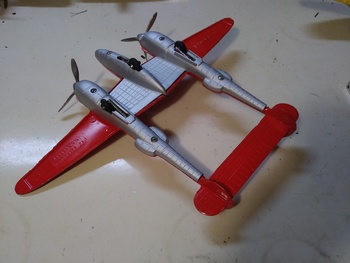 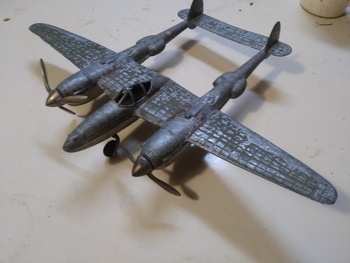 Finally picked up a Hubley P-38. I've always loved the Lightning, it wins the most recognizable silhouette award of WW II easily with the twin booms. It's the first of several of Kelly Johnson's famous aircraft. Even though the P-38 wasn't a true fighter, it was designed as a high speed long distance bomber interceptor, the top two American aces flew them. It was a speed demon for it's time and a fast climber, not a agile dogfighter. My high school Phy. Sci. teacher flew one in the Pacific, in fact he got shot down in one!
It was cataloged from 62-65 as #881 and changed to #1881 later. I can't verify if it was still offered after 65 when Gabriel bought Hubley. It does not appear in a '71 repro catalog I have. I've commented how most Hubley aircraft were not proportioned accurately for the most part. IMO the P-38 is their most accurate job, I think it's s great rendition of the Lightning. It measures 9 1/4" long with a wingspan of a little over 12 1/2". I checked the proportions of a real P-38 and it's very close. It's scales out to about 1/50. I checked it with a 1/48 Revell/Monogram kit I have and it's just a hair smaller than the model. It's got great detail also, good skin panel/rivets, turbochargers, etc. Hubley had some plastic planes that were pretty good models of the aircraft they represented, but the only metal plane that comes close in accuracy to this one was their P-40. I think they did an outstanding job of capturing the sleekness of a beautiful aircraft.
I restored in the most common red/aluminum, it also came in a almost reversed color scheme. There are also camo versions and a rare dark blue that came in a set only. I had to replace the props and one landing gear strut, but I got a great deal on it and I'm happy to finally have one. I remember seeing them on the shelves in stores and I thought it was so cool looking. I even got ANOTHER #495 junker in the deal!
Thanks for dropping in,
The Toyrebel