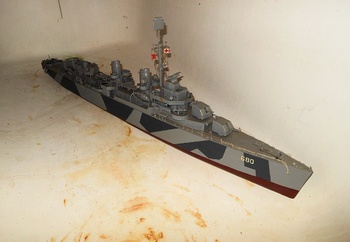 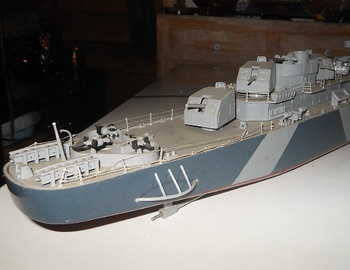 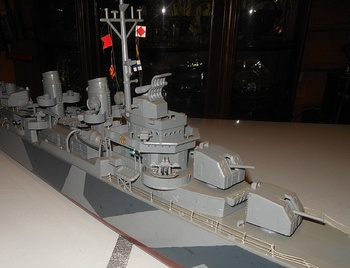 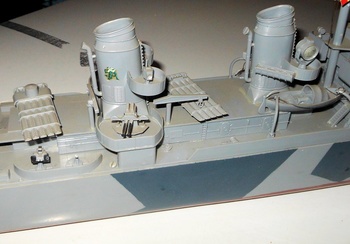 This is my big find from Long Beach. It is a three foot long model of a Fletcher Class Destroyer from WWII. The Fletcher class destroyers were a very successful design, they made 175 of them during WWII. US Navy of course. They were used almost exclusively in the Pacific.
Now for some commentary on gun turret nomenclature. I like the British version where A & B are the two front turrets (C if there is a 3rd forward turret). X and Y are the rear turrets and Q, R, S etc. would be the turrets midship. The midship turrets were more commonly seen in WWI. USN just numbers the turrets 12345 and so on. The British version lets you know exactly where the turrets are ie B Turret is the second one forward. Q turret is midship. Here we have ABQXY configuration. The next class the Sumner Class had A, B and X with 2 guns each instead of 1 each as seen in this model. That would seem like a superior design but it was front heavy and lacked the balance of the Fletcher Class Destroyers.
The various weaponry can be seen in the photos. Depth charges, 20mm AA guns and the X and Y turrets can be seen in photo #2. The dual Bofors 40mm AA guns are around the superstructure in photo #3. Wrapping it up are torpedo tubes in photo #4.
I may do a part 2 later on but I think this will do for now.
Special thanks to Toyrebel for identifying this as the Lindberg Blue Devil Destroyer. It is 1:125 scale.