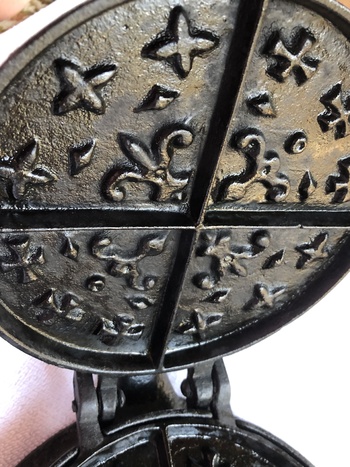 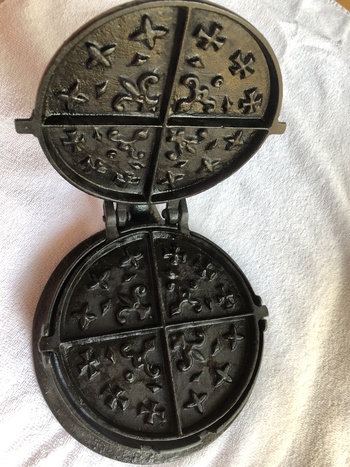 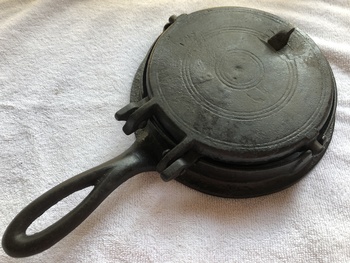 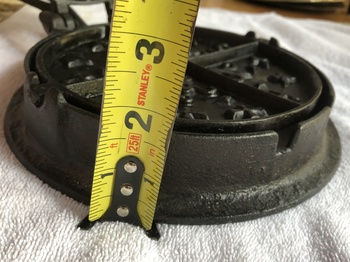 This was the first antique cast iron waffle maker I had ever seen.
I found it in an antique/junk store in Temecula, California about 25 years ago.
When I saw the fleur-de-lis and cross pattern inside, I knew I had to buy it. I think I paid $45 for it.
It was in great shape, just needed a good scrubbing and a light re-seasoning and it was ready to use.

I’ve used it ever since and never once has a waffle stuck in it! Whenever I cooked breakfast for guests, I made waffles for them and let them have the experience of making them for themselves. Everyone enjoyed the experience and the resulting product!

There is no maker’s mark on it; just the number 8 in the top.
I’ve seen identical or near-identical ones on WorthPoint and Pinterest. There’s no consistent dating or authenticating that I have found. Dates I have found range from 1850s to 1910.

Trying to research this item led me to read that waffle irons originated in the Netherlands circa 14th century!
An American patent was issued to a Mr. Swortwort in 1869 for “improvement in waffle irons” which still had the 2 hinged iron plates with waffle grid pattern which could swivel in an iron collar; the “improvement” he added was a novel handle for opening, closing and turning the waffle iron plates.

His “improvement” must not have caught on very well.....I started a collection of antique cast iron waffle makers so, for at least a decade, I was on the lookout for them.....and I never saw one with that special patented handle contraption.
You just can’t improve on a good thing!

After I found 7 or 8 that were special to me, I stopped collecting because they are heavy and take up storage space. Plus, I no longer have a gas stove so the waffle makers are packed away for now.
In researching for info on those I have, I was happy to see they are valued a good bit higher than they were when I was in the market for them.

But the most exciting thing I learned just minutes ago is that August 24th is celebrated annually as National Waffle Day!
Who knew??

Comments and info are welcomed!
Thanks for looking - hope you enjoyed!