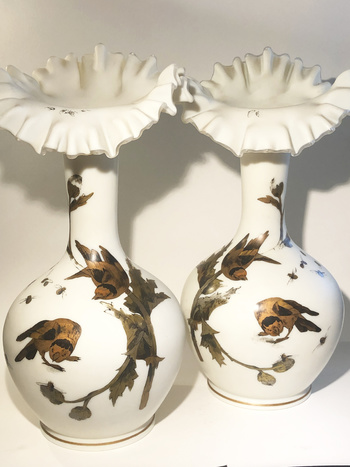 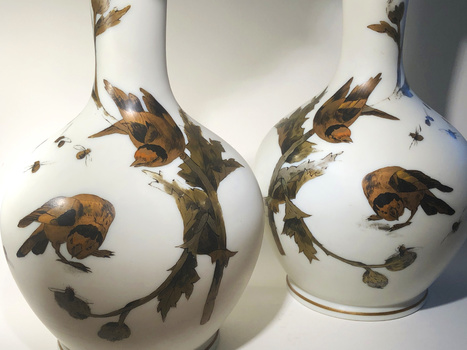 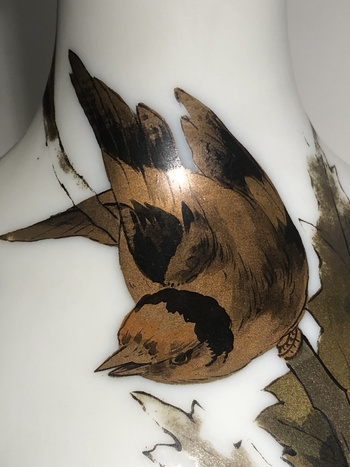 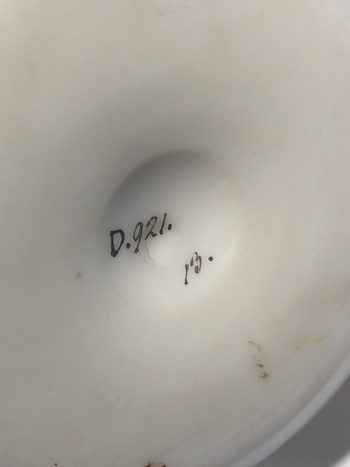 'The Birds and the Bees'
Let me first say that I am 80% confident that these are Riedel and I think fairly early in the influence of Japonisme design and illustration at the later part of the 19th century. The illustration on these is distinctively Japanese in style, rather than the slightly modified European interpretation of such. These are painted in almost exclusively what I would describe as 'metallic' gold, silver and bronze enamels and black, these dont appear to be gilded on any part of the illustration. There is some loss of this enamelling, perhaps in obvious areas around the neck. Having handled these it is certainly the safest place to grip them and they certainly appear to have been used for floral decoration as there are some clear vertical scratches down the inside of the necks. Some of the bees have lost some detail to their wings, again, these are so finely painted, with hairline black enamel, again, perhaps unsurprising over 130/140 years. There's also been some enameling to the rim, most of which has been lost.

What points me toward Riedel, well the 'ruff' around the necks, seen more commonly on Riedel as oppossed to Harrach or Moser. And the numbering, although this may be were some might disagree, I think the numbering is relatively consistent with Riedel, OK missing the more frequently seen 'forward slash/' seperator, there are examples of known Riedel pieces without it. Doubts 1), that it just might be by another maker, like Harrach or 2) that it was a blank perhaps produced by Riedel and painted by another company?? and thirdly, I feel I have seen very similar illustrations on known Riedel pieces, I have tried to find images to support this, but I can't. So there are some questions, but I'm going to stick with Riedel. I would love to hear your thoughts guys.

I own up to being guilty to spending way too much time hunting Ebay (mostly) for my pieces. I'm always looking for exceptional stuff at the cheapest prices, I'm always on a budget. So having said that, I was lucky to get these two for just less than the cost of a good thanksgiving/Christmas turkey (yep.. less crass than mentioning actual money). They were advertised in the german site and were described as "f33m15- Paar Flatterrand-Vasen mit asiatischen Vogelmotiven, um 1900" So missing some obvious key words, that I or other collectors may use to try narrow down searches.

All said and done these are an impressive and impossing pair standing as they do at 14" tall. 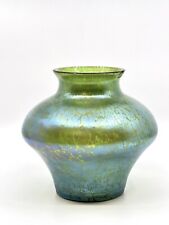 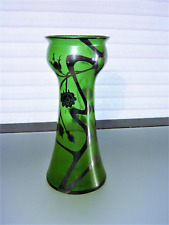