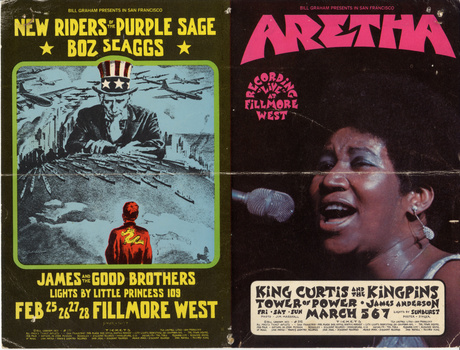 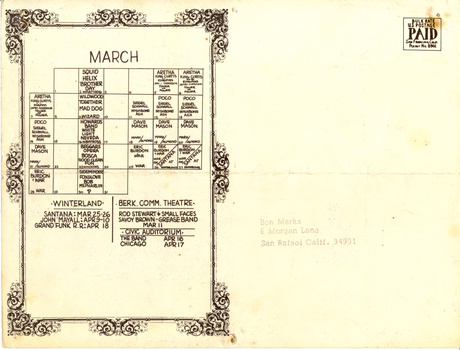 For a brief period, perhaps only a year, I was one of those lucky people who was on the Fillmore West mailing list. Every few weeks a double postcard would arrive in the mail. The front would typically have two joined postcards, each a smaller version of the full-size poster advertising each show. On the back of the double card would be a bulk-rate stamp, a blank space for an address (this one reveals the location of my privileged childhood), and a calendar listing concerts at the Fillmore and other Bill Graham venues such as Winterland and the Berkeley Community Theatre.

Sometimes artists such as David Singer, who created both of these cards and the posters they were based on, would produce compatible imagery, knowing that the cards would be joined at the hip, if you will. In this pairing from 1971, though, Singer created two works of art that were very different.

On the left is a concert headlined by the New Riders of the Purple Sage, which got top billing in those days thanks to the presence of the Grateful Dead's Jerry Garcia on pedal steel guitar. Boz Scaggs was also on the bill, with lights by Little Princess 109 (I always loved that name!). A collagist himself, Singer worked with Wilfred Satty on this beauty, which was obviously a commentary on the war in Vietnam.

Singer's collaborator on the Aretha image was with the late Jim Marshall, one of the most prolific photographic chroniclers of rock 'n' roll. As he had done with the Satty image for the New Riders show, here, too, Singer held back, letting Marshall's close up of the Queen of Soul speak for itself.