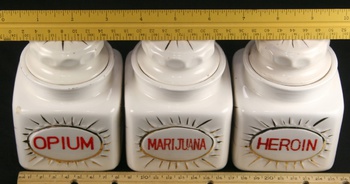 This is a vintage set of porcelain apothecary jars labeled "OPIUM", "MARIJUANA", & "HEROIN". They were made in Japan. These jars were initially a set of 4 which were sold by a pharmacy called "Salisbury Drug" in a the small town of Le Sueur, MN. The 4th jar is missing from the set. In the North Western Druggist Volume 18 book (the page is dated November 1917) it states that Wm. Salisbury of Le Sueur had taken charge of the town drug store after the previous owner W. H. Rethwill disposed of it. The drug store no longer exists today as it went out of business around 1986. The building is now a sports bar.

The bottom of the Opium jar has the original price tag on it from the drug store. It is marked "Salisbury Drug~Le Sueur, Minn.~ETX 1.39~Set Of 4". The other 2 jars have a "JAPAN" sticker on them.