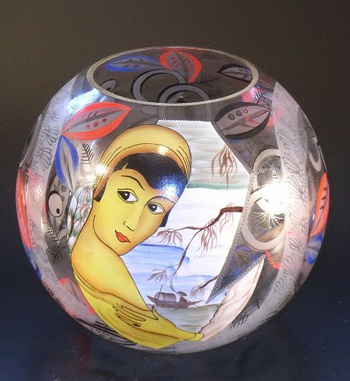 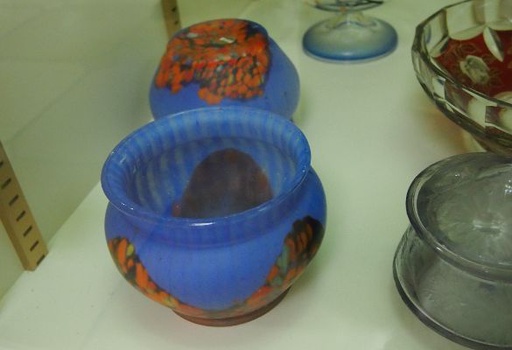 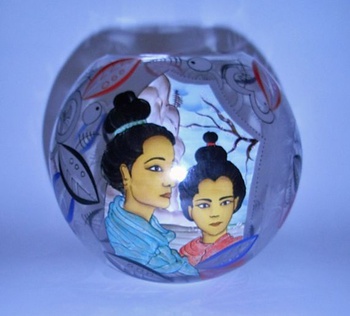 Well I set myself the task of featuring some, in my opinion, (very) ‘unsung heroes of glass’ I did not fully realise that as they are really unsung then finding pictures of their work gets really hard.

It doesn’t mean though I can’t go a little oddball.

For me No2 in this series goes to the great (and I suspect a little crazy) Erwin Pfohl. Erwin was the younger brother of the more famous Alexander and often when Alexander left a job his younger brother took over. Erwin (1905-75) is usually noted as a glass painter, or rather, as we might term it, an enameller. For Josephinehutte and a number of Novy Bor glass makers he enamelled some pretty wonderful and strange pieces.

The two enamel examples above (left and right) are what I call ’tropical deco’, simple goldfish bowls enamelled with strange and colourful tropical scenes. The Museum Szkla Novy Bor has a larger and much finer example of the left hand one, which leaves me to believe my two, although period, may only be ‘School of’ Erwin Pfohl. Whatever they are they are quite wonderful and I think worthy of sharing. The museum also has a selection of his drinking glasses, ridiculous things often a foot or more tall, with tiny bowls depicting cartoon characters playing a variety of games ranging from poker to polo. Alas I’ve never seen an example outside a museum.

In 1930, whilst at Josephinehutte (technically not Bohemia but Silesia, but still only a few miles from Novy Bor), Erwin designed some more crazy, almost psychedelic, enamelware and a strange range of mould blown furnace pieces. Somewhere halfway between WMF Ikora and 1920s style Kralik; they called them ‘Vineta Kristall’. They look wonderful and were done in dozens of variations and designs. Alas even the Passau museum has only one or two examples (centre picture) and these are the only ones I’ve seen. Fortunately I have permission to share my photos from Passau. Maybe this range was never popular, but they look really interesting and fun.

Sadly we have only a few examples from this man’s glass career. I really wonder what else he did. 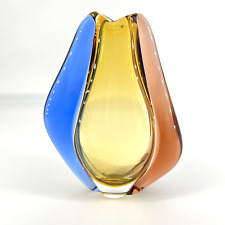