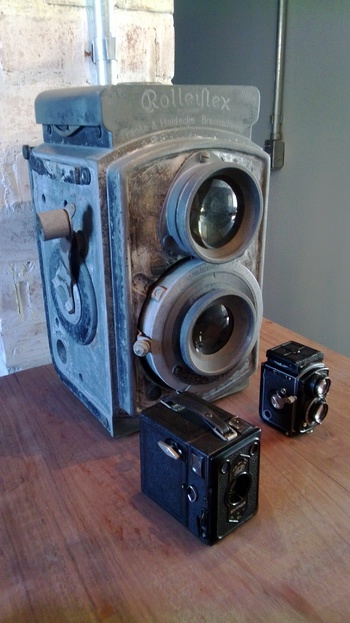 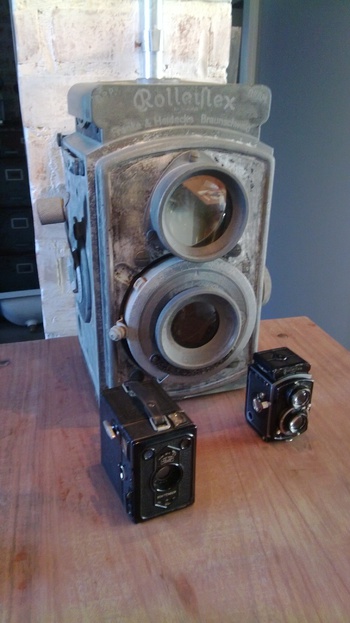 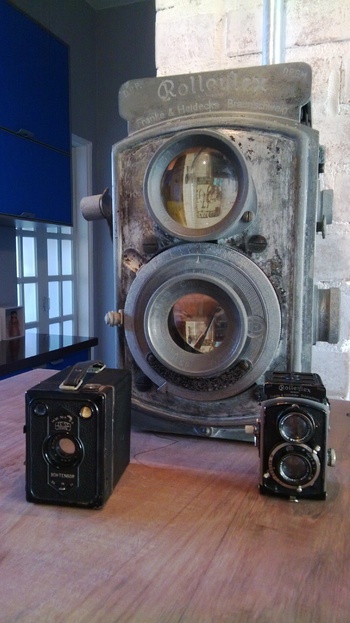 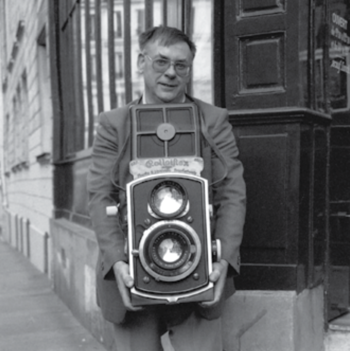 The previous owner didn't know much about it except that it used to sit at the window of an old camera shop in Rio de Janeiro until the 1960's, when the shop closed. The shop owner kept the big camera with him 'cause it was a gift from a good friend, a camera salesman who brought it from Germany to Brazil.

He told me that when the camera shop owner turned 90 years old, he decided to get rid of his old belongings and he gave it for free to the guy who sold it for me.

As soon as I saw it I knew it was made by Franke & Heidecke (Rollei) due to the fine details it has. All the low relief markings are accurate, there are lens markings and even a serial number (118959). It is all aluminum made, with brass details (screws, film advance crank, shutter lever).

The top viewfinder pops up open just like in the real Rolleiflex cameras and it has even a ground glass inside it. It has no mechanical parts, the interior of the replica is empty, the lenses are glass with nickel plated round plates behind them to simulate reflections.

I was so amazed with it that I started an extensive research to know the history behind it. I contacted collectors and enthusiasts all over the world and thanks to them I found a German collector, probably the most important Rollei collector in the world, Mr. Frank-Peter Hoffmann, who lives near Braunschweig, the city where Franke & Heidecke / Rollei was born. He owns two of these giant replicas and he told me that Franke & Heidecke made ten of them to be presented at the 1932 Leipzig Spring Fair to promote the launching of the "new" Baby Rolleiflex 4x4 camera. Up to now, I was able to know the whereabouts of 9 of the 10 replicas: 4 in Germany (two of these are in the collection of Mr. Frank-Peter Hoffmann and one of these two was found in the US), 1 in the Netherlands, 1 in France, 1 in Argentina, 1 in Brazil (mine!), 1 probably in Hong Kong, China, as I found a picture of one of the replicas taken there in the 1960's).

Well...after a whole year researching, web-surfing and reading all the books on Rollei history I could find, I got the antique camera collection fever. I obviously had to start with the 1930's Baby Rolleiflex and then decided to start a small collection of 1930's cameras. My second camera was a Zeiss Ikon Box Tengor 54/2. That's it for now, I hope you guys enjoy the pictures.