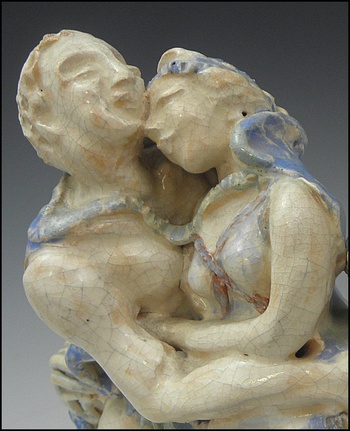 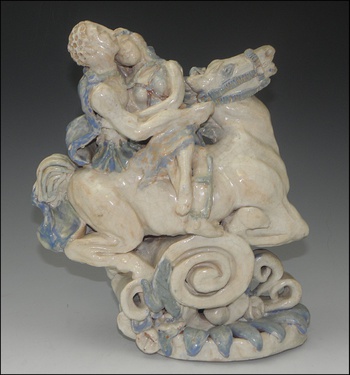 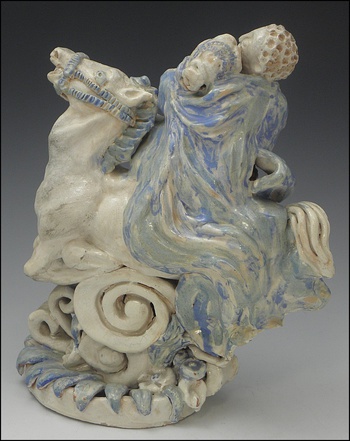 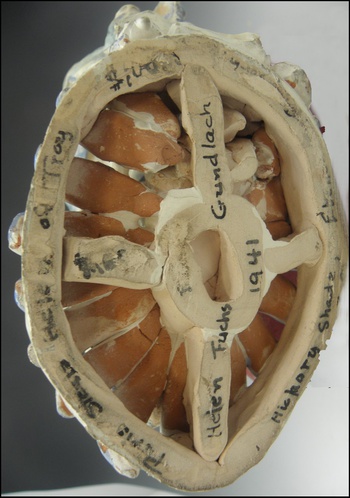 As I grow older, this has become one of my favorite works in clay. While Paris's arm is too long and the beautiful horse is a little out of proportion to its riders - just look at the close-up of the expressions on the faces of Helen and Paris and their embrace - and you will understand one of the reasons I appreciate this so much.

The artist, Helen Fuchs Gundlach, is rather obscure - or at least I have found out very little about her. Born 1892, died in 1959 in Ebenezer, NY, Erie County. She was a sculpter, painter and lecturer. She lived on Seneca Street in Ebenezer and owned the "Hickory Shade Studio". This work was done in 1941 and the artist asked $100.00 for it (expensive then I think). Most of this information is written on the bottom of the piece. If you search the internet you can find/see one of her paintings and one other clay work, entitled "Garden of Eden" - it sold last year for $50.00

She was of another time here in America and perhaps also in the world. The work itself speaks of an education in the classics. The words "Ebenezer", "Seneca Street" and "Hickory Shade Studio" evoke a simpler time and perhaps a better one, at least in some respects. I contrast her classic education/knowledge with the fact that 25% of school children here in my country think the sun revolves around the earth and many can tell you what color underwear (if any) certain reality "stars" wear - but don't have a clue (or care) who the Vice President is. I love my country but think we have lost something . . . or maybe I'm just older than I realize.

I hope, out there somewhere, there is a grandchild or great-grandchild of Helen who knows who she was and thinks about her with pride. When we leave this earth, for most of us, all that remains is a stone with a name on it. For artists like Helen Fuchs Gundlach they leave behind something that transcends time . . . creations of beauty.