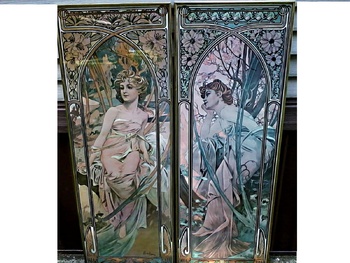 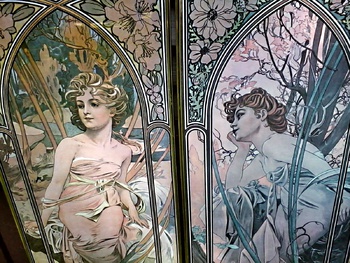 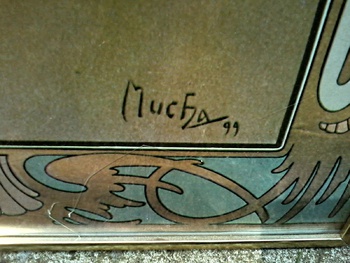 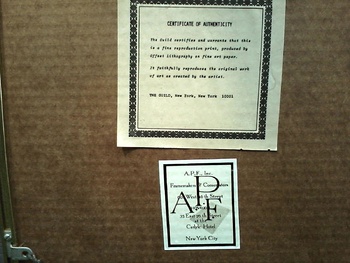 Picked two framed art prints up at Salvation Army this morning. They are reproduction lithographs of Alphonse Mucha works. The titles are "Evening Contemplation" and "Morning Awakening". They measure 16" X 46" in gold anodized aluminum frames with plexiglass. They are part of a series of four representing the times of the day. Morning Awakening, Brightness of Day, Evening Contemplation, and Night's Rest from 1899 . There is a certificate of authenticity on the cardboard back of each framed print. They say: CERTIFICATE OF AUTHENTICITY. The Guild certifies and warrants that this is a fine reproduction print, produced by Offset Lithography on fine art paper. It faithfully reproduces the original work of art as created by the artist. THE GUILD, NEW YORK, NEW YORK 10001. Framed by A.P.F., Inc. Frame makers & Conservators 601 West 26th Street Showroom 35 East 76th street at the Carlyle Hotel New York City. I'm not sure of their age but there was a pair on Worthpoint from 2011 and they were saying this same pair was believed to be at least 50 years old. No value unless you subscribe. These look to be a bit faded but maybe not.I've also noticed that sometimes the same print will be reproduced in different tones like blues or orange and gold shades. Reproductions vary quite a bit in color and intensity. -Mike-

Mucha was established as a leading poster artist between 1895 and 1900. During this period, six posters by Mucha appeared in Les Maîtres de l'Affiche, Jules Chéret’s monthly publication featuring the best posters of the time selected by him. Also from that time, Mucha’s distinctive style was called ‘le style Mucha’, becoming synonymous with the current ‘Art Nouveau’ style.
It was Mucha’s belief that through the creation of beautiful works of art the quality of life would be improved. He also believed that it was his duty as an artist to promote art for ordinary people. He was able to fulfill both of these objectives by means of his innovative concept of the mass-produced decorative panel. Of the panels, Mucha later wrote: ‘I was happy to be involved in an art for the people and not for private drawing rooms. It was inexpensive, accessible to the general public, and it found a home in poor families as well as in more affluent circles.’
The first of Mucha’s decorative panels were The Seasons (1896), a series of four panels representing the theme of the four seasons. The series proved very popular and it was followed by other popular series including The Flowers (1898), The Arts (1898), The Times of the Day (1899), The Precious Stones (1900) and The Moon and the Stars (1902). These panels illustrate all the typical qualities of the Mucha poster – the beautiful women with suggestive gestures, the decorative use of flowers and flowing hair, the subtle yet striking colours – all combine to create a compelling harmony of vision whose intention is to inspire and elevate the viewer.