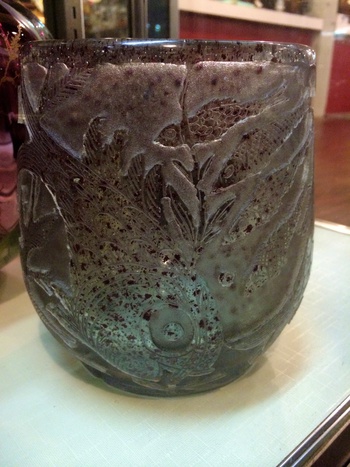 I debated on whether to post this here, but this spectacular vase deserves to be remembered. Let's start with the bad news - it is no more. The clerk at the antiques shop where I bought it put it in a paper bag with twine handles. Since it weighed upwards of six pounds, guess what happened - when she picked it up, the handle broke, and it hit the ground and was lost forever. We hadn't even finished writing the check. I won't get into the aftermath - it ended as equitably as it should have under the circumstances, but the disappointment lingers - truly, the piece that got away.

This vase (not one like it... this exact vase) was featured on Plate 168 of Moser Artistic Glass, Edition Two, by Gary Baldwin. It was, after all, Mr. Baldwin's booth at the antiques shop where I found it. From a series of rough and deeply acid-carved vases designed by Hussmann, these were very expensive to produce. They date to the very beginnings of the art deco period. The stylized fish decoration on this vase was even more spectacular in person. The base was polished, with ground and polished pontil mark, where the designer's "HH" monogram was signed.

Part of me wants to go out and find another... but vases like this, due to the production methods used, are truly one of a kind.