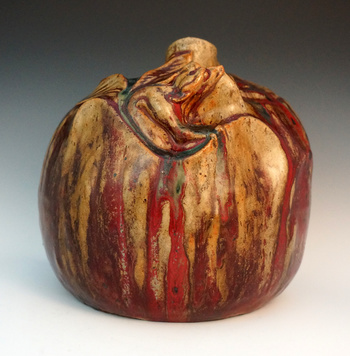 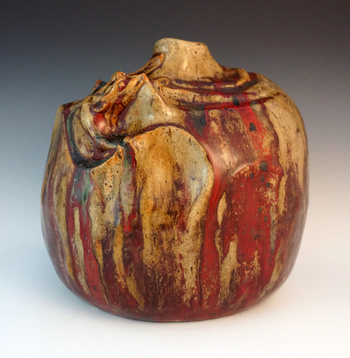 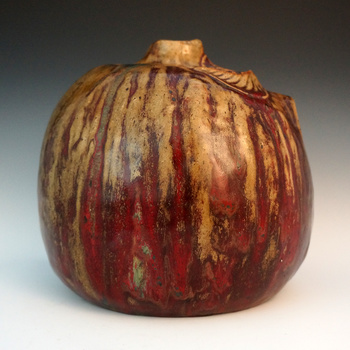 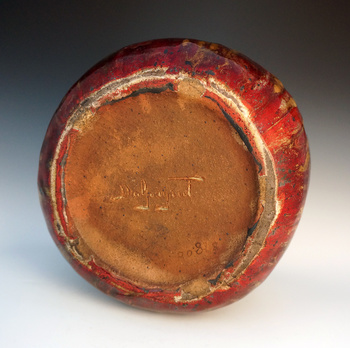 One of the finest and artistically important figural ceramic vases in my collection. A large organic formed stoneware vase with a molded stylized dragon that is either emerging from the fruit or eating it. The form was sculpted by Alphonse Voisin-Delacroix (1857-1893) shortly before his death, and a known variant of the same fantastical creature appears on a similar “VD” signed Dalpayrat piece from the same period. This vase represents some of the initial ceramics produced by Voisin-Delacroix and Adrien-Pierre Dalpayrat (French, 1844–1910) in his famed "sang de boeuf" glaze, which was first presented to the public in 1892 at the Galerie Georges Petit in Paris. The base is inscribed deeply with Dalpayrat's signature, and, incredibly, there is also a penciled in price of $18, though I'm not certain if this is contemporary to the vase's production. Dimensions: 8.7”(H) x 9”(W).

By my count there are only 4 known (published) examples of this vase, one in the 1998 Arnoldsche Dalpayrat catalogue raisonné, two pieces of the same form that sold at auction in 2007 (both through Camard & Associés), and the piece above. It is unclear if the exact signature/markings are shared on all pieces.

Alphonse Voisin-Delacroix (1857-1893), Swiss born, was a pupil of the sculptor Henri Chapu. In 1892, Voisin-Delacroix joined Dalpayrat in operating a small ceramic studio at 9 and 11 High Street (now destroyed and at the location of No. 33 and 35 Avenue du Général Leclerc in Bourg la-Reine, Fr.) for a year of fruitful collaboration, creating pieces with flowing handles, fantastical creatures, moldings and striations well within Art Nouveau tastes of the time. Their first exhibition in December 1892 at the Galerie Georges Petit (1856 - 1920) was greeted enthusiastically and was carried over into a subsequent exhibition at the Chicago World's Fair in 1893. The success of Dalpayrat and Voison-Delacroix's collaboration led to a second exclusive contract with Galerie Georges Petit for a period of twelve years, but sadly this contract was voided by the untimely death of Voisin-Delacroix from pleurisy on 4/2/1893.