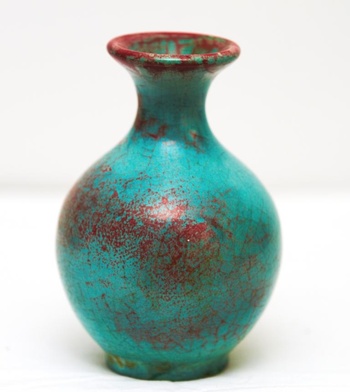 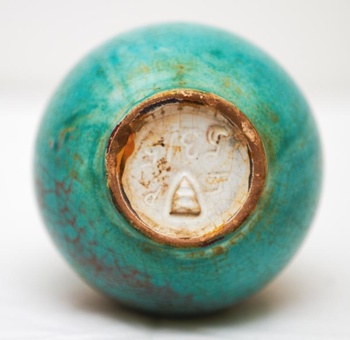 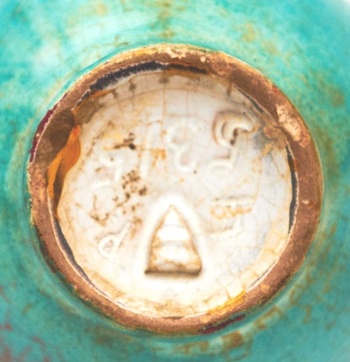 Vase with turquoise and burgundy glaze, produced at Michael Andersen, probably in the late 1930's. The Michael Andersen Pottery tends to overshadowed by other potteries such as Hjorth, Kähler and few others. Exceptions are their early art nouveau drip glaze and majolica vases marked with MA&S ('Michael Andersen & Son'). However, the Pottery was really quite inventive and you may be able to find great pottery from Michael Andersen from time to time. This vase, for example, is decorated with the so-called Persia glaze, created by Daniel Folkmann Andersen (son of the founder Michael Andersen) and awarded with a gold medal at the World's Fair in Brussels in 1935 (there are also examples in this forum, e.g. vetraio’s great owl! http://www.collectorsweekly.com/stories/26759-hedwig-michael-andersen). It is found in different nuances, and this combination is not unusual. Just a few years earlier, P. Ipsens Enke had developed their version of a green/turquoise glaze, the Danit glaze.

Daniel Folkmann Andersen (1885-1959) seems to have been an interesting person: he was trained not only as a ceramist, but also as a classical singer. In fact, he lived for a couple of years in Bulgaria and worked as a professor at the Royal Bulgarian Music Conservatory from 1928 to 1930, when he returned to Denmark. He had divorced his Bulgarian wife (a classical pianist) and his father at home was getting old... Back in Denmark he ran the factory with his brother Michael Andersen with great commercial success - during WWII the factory employed 70-80 people!

Height: 14.5 cm. Mark: Three herrings in a triangle (the town arms of the town of Roenne where the Pottery was located) and some numbers/letters. The mark was used from ca. 1930 and onwards; in the beginning it was a stamped mark and from the 1950’s it was incised (often quite haphazardly).