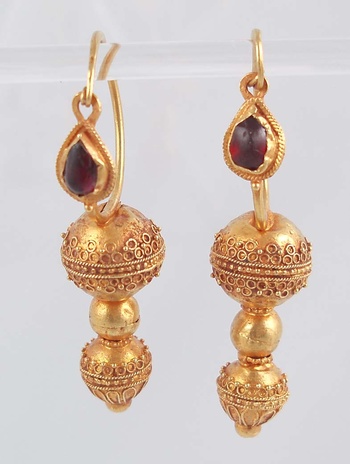 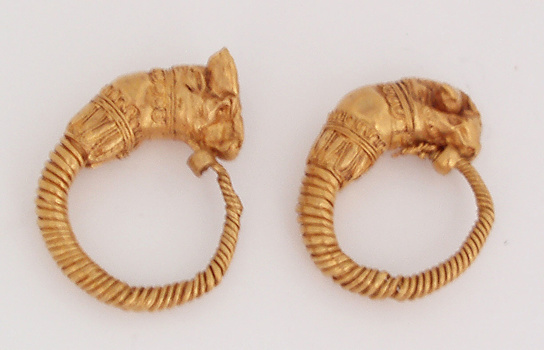 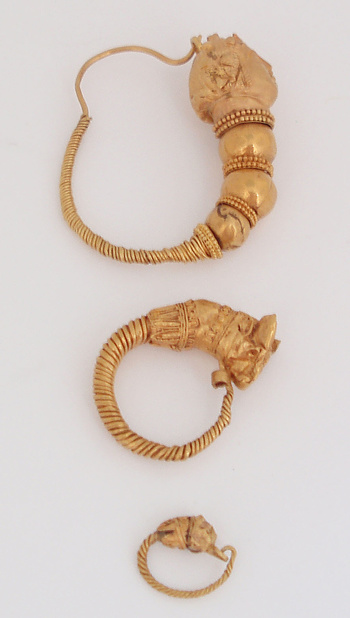 A few years ago, I had the opportunity to buy 4 pairs of museum-quality, ancient gold earrings -- it is a miracle that they have survived. I haven't tested the gold, but early gold was not pure, usually combined with copper so it could be formed into objects.

- These gold and garnet earrings show the early techniques of granulation and filigree. The Etruscans (natives of Etruia, a region of Central Italy, located in an area that covered part of what are now Tuscany, Lazio, and Umbria), learned these techniques from Syro-Phoenician jewelers who settled in southern Etruria and taught local apprentices the art of granulation and filigree during the 9th and 8th centuries BC. I have not seen another example of such earrings, but have circa dated them to 500-400 BC.

- Large Greco-Roman gold repoussé earrings of Maenads. Repoussé was another technique perfected by the Etruscans and literally translated means to push back. The technique consists of hammering the design behind the ornament with the relief on the opposite side. These earrings have three ascending hollow gold beads separated by double-rows of tiny gold granules terminating in a conical collar with granular decoration from which emerges the hollow gold head of a maenad. She is wearing a double ivy wreath in her finely detailed hair which is centrally parted and drawn into a chignon at the back, with two long curls framing her face. The earring hoops are a combination of twisted wire leading to smooth wire with the end of the hoop passing into a loop at the back of the maenad's head. In astonishingly intact condition and circa 400-300 BC.

- Greco-Roman gold repoussé bull's-head earrings, each with a hoop of tapering twisted wire that hooks through a loop on the underside of the head, the heads emerging from ornamented collars with fine detailing. The heads are rather smooshed.... Circa 400-300 BC

Castellani was one of the leading Italian jewelry design firms of the 19th century. In 1836 when the Etruscan Regolini-Galassi Tombs were opened, papal authorities invited Fortunato Pio Castellani to study the jewelry discovered there. He could not immediately reproduce the soldering, even when checking all ancient (Italian) sources. However at the time, there were still some traditional goldsmiths, in remote areas of the former Etruscan area, that used similar techniques with similar results as the Etruscan jewelry. Castellani deduced the techniques of the Etruscans from these artisans. Such an approach is not uncommon, and anthropological analysis is often applied to explain archaeological finds, especially in 'traditional societies' where little has changed over the centuries.