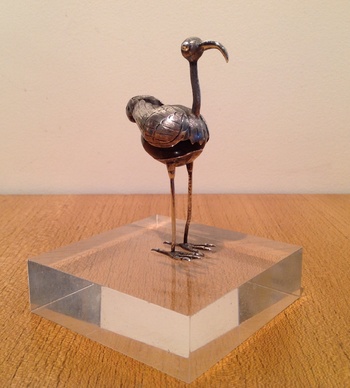 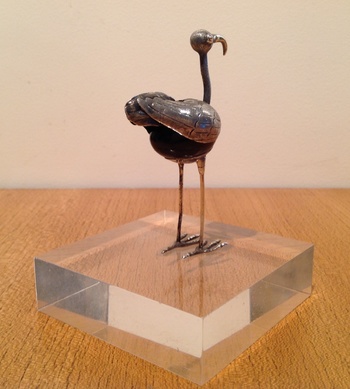 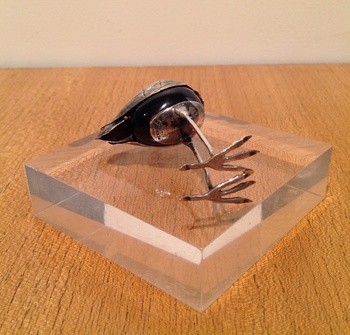 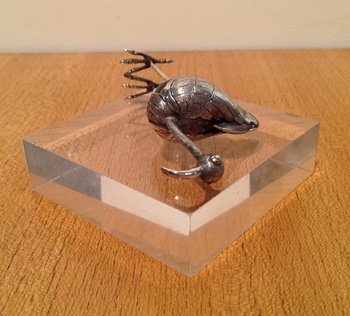 A fortnight ago I found this and another as well at my favourite shop on a shelf. They were marked as Mexican silver ... but the bodies were sitting on what I first thought were glass eggs. They brought a smile to my face. I had to have both of them.

When I got home I began looking again at the marks on the birds. This bird is marked on the base: HECHO EN MEXICO STERLING. 925. I S V. The base is one of three parts of the piece. The base and feet of the bird are glued, fixed to an agate egg that makes up the body of the bird. Above that there is the head, neck and feathers made of silver that sit over the upper face of the agate. The upper part is not fixed, but actually moves over the rounded surface of the polished agate. You can change the shape of the bird into a variety of positions.

This bird reminds me of a flamingo but I might well be wrong.

I have seen a few similar birds on the net. But I need some help with these two birds. I have so far not been able to identify the maker. I am supposing that the 'I V S' is the maker's mark.

Perhaps someone knows some more about the bird ... is it a Déco piece or is it later?

Both of the birds are very well modelled and beautifully constructed.

Any comments are welcome.