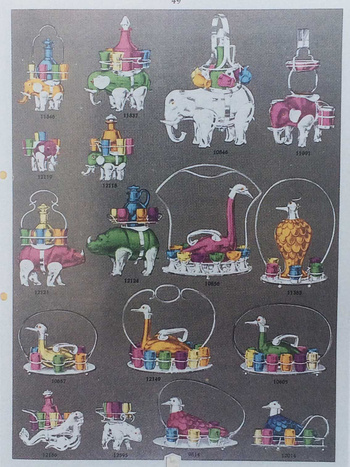 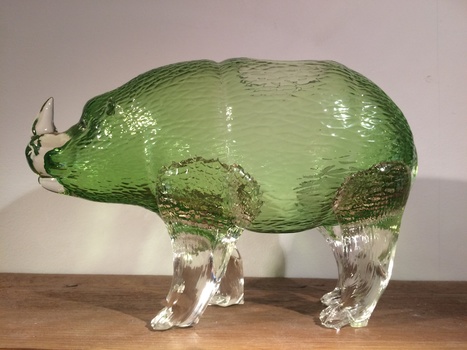 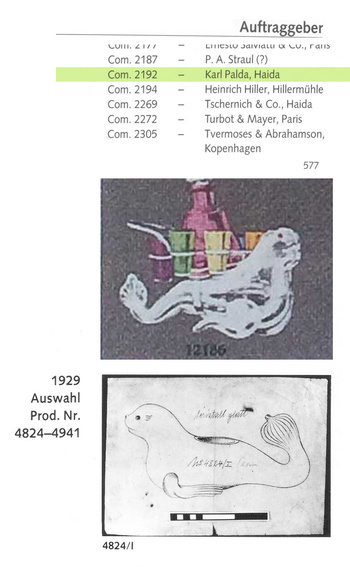 So I'm not accepting my 'Clara' becoming a non-Loetz animal just yet.
Before I start let me just say a massive THANK YOU! to OZMARTY for providing much of the evidence that would suggest that Clara is indeed a product of Loetz.

Image 1 : This shows an image taken from Truit II page 15, which shows a series of rather bizarre decanter sets balanced precariously on glass animals. This page is from a Karl Palda Glassworks catalogue from the mid 30s. As you can see by comparing image 12124 (if you can make it out) with my Clara there is a distinct similarity - let's just say it - "she's the same beast."

This was the curved ball that just started to roll and roll!!

Image 2 : Shot without the metal fittings that can be seen more clearly on my earlier post (http://www.collectorsweekly.com/stories/183471-loetz-martele-rhinoceros)

Image 3 : Now this is where things get interesting. Marty provided me firstly with a Loetz Commission record from Cantz (shown at the top), Com. 2192 - Karl Palda, Haida. This number apparently indicates a 1930's date, I don't think we can be absolutely specific about the year.
Below this are two images, which I am using to justify my case in support of Clara being a product of Loetz and not of Palda. As you can see, I have enlarged the image of a seal which is shown in image 1 (bottom left corner - no. 12186). The image below this is an image from P.260 of Cantz, prod nr. 4824/I. The similarity is striking.

As fellow collectors here will freely admit, when you have an object 'in-hand' you can end up on a long quest to establish many facts about it and during that journey discover some extraordinary surprises along the way and all with the help of other passionate collectors whose input here and on my previous post I gratefully acknowledge - Special thanks again to Marty.

So, in summary, in my opinion, and I'm something of a novice at this, but I am prepared to say that, although there may not exist a Cantz illustration of a Loetz Rhino it does not mean that they did not produce it on commission for Karl Palda, a company not producing, as far as I know, blown art glass. Indeed why would they reproduce elephants, rhinos and seals etc. when they could be cost effectively provided by Loetz, a company already producing such products. I would also like to add that I think the reason why we see more Loetz elephants than we do other animals, putting aside our general human affinity with such creatures, is simply that they were more popular, therefore likely more were sold and more produced and therefore more have survived the ravages of time. As seen in the Palda cataloge page (ignoring the bird decanters) they make up 60% of the 'mammals'.

So there you have it, I present my case.
I believe my Rhino (Clara) to be a product of Loetz.
All that agree say: I DO!
I'll accept any challenges to the contrary.... 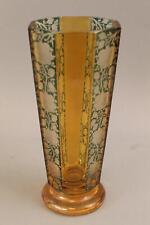 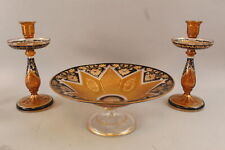