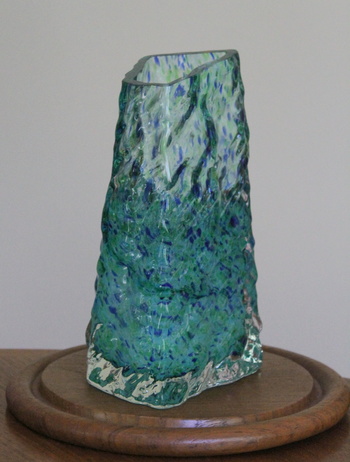 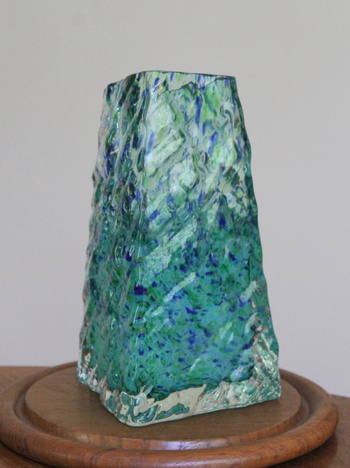 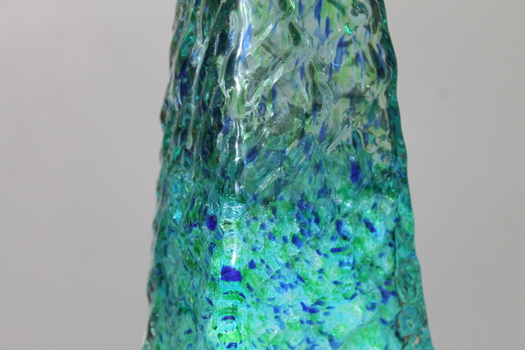 I have posted before a number of items by Toshichi Iwata and his son Hisatoshi but have only very recently acquired my first work by Hisatoshi's wife, Itoko.

Born in 1922 Itoko began her art career in 1935 studying with the painter Ikuma Arishimi.
After marrying Hisatoshi Iwata in 1949 she turned her attention to glass making, and by 1958 was designing glass for the Iwata factory.
She designed a number of architectural glass walls for notable buildings such as the Asahi Glass Plaza and Mitsukoshi department stores.
She also designed glass and steel furniture.
In 1975 she became president of the company and guided it well into the 1990s.
Her first solo exhibition was in 1968, and she exhibited at least once every year until her death in 2008 (at 86).
She was a strong promoter and supporter of Japanese art glass, was a founding member of the Japan Glass Crafts Association, and served on the Corning Glass Museum board.

I was so happy to get this vase.
Made from aqua glass with blue and green spatter it has been partially bubbled to the mid line. It has been clear cased and placed in a trapezoid mould that has given it textured sides.
The top has been cut and ground at an angle.
Height 25cm (10in)

I am now seeking a work by Ruri Iwata, daughter of Hisatoshi and Itoko, who is a contemporary glass artist.