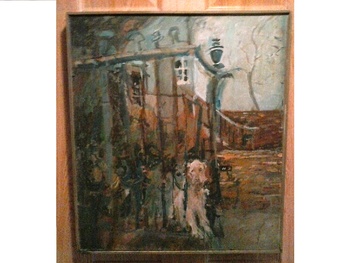 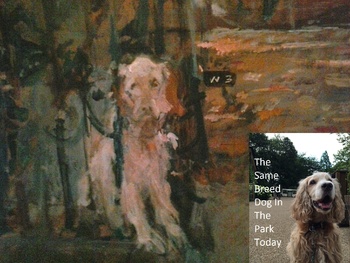 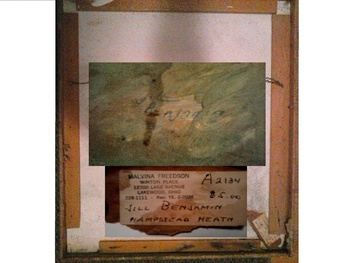 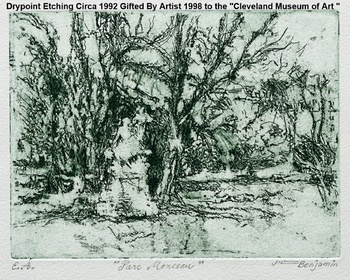 Here's another painting that I had been admiring at our shop. It was in my friend Katie's booth and sadly she is leaving us after many years. So she has some great deals going on to help clear out her inventory. The artist is Jill Benjamin. Very little in the way of a bio online although one of my art data bases I have bookmarked does list her. It shows only her birth year so she may still be alive at 92 ! No auction records either just a signature example that you'd have to pay for to view. The title is "Hampstead Heath" and it's painted on a 21" x 24" panel of primed Masonite. There's a very simple lathe frame around the outside. Luckily a label has survived from the dust paper on the back. It shows a previous owner or gallery, the artist's name and the title, along with some mysterious numbers and even the original price. Hampstead Heath is a famous park in London. The painting shows a rather forlorn dog sitting by one of the park gates. I love the muted fall colors and the impressionist style. I hope to find out more about the artist but so far the sparse information only adds more to the mystery. -Mike-

Note: 9/30/2016 I came across a drypoint etching by Jill Benjamin that was personally gifted to the Cleveland Art Museum by the artist in 1998 although it is not on display. It's a landscape entitled "Parc Monceau" Circa 1992. (http://www.clevelandart.org/art/1998.146) Still nothing in their catalog or reference library about the artist herself. Although the distinctive double "L"'s in her signature on the etching match the ones on this painting perfectly. Quite the mystery woman. -Mike-

Update : 9/30/2016
There was a link to "ask an expert" at "The Cleveland Museum of Art" on their site so I did and viola' I was sent copies of press clippings that were in the Ingall's library from her showings. Born in New York she moved to Ohio where most of her exhibits took place from the mid to late 60's. A UCLA graduate she also attended the Cleveland Institute of Art and now lives in Beachwood Ohio. -Mike-

Hampstead Heath (locally known as "the Heath") is a large, ancient London park, covering 320 hectares (790 acres).This grassy public space sits astride a sandy ridge, one of the highest points in London, running from Hampstead to Highgate, which rests on a band of London Clay. The Heath is rambling and hilly, embracing ponds, recent and ancient woodlands, a lido, playgrounds, and a training track, and it adjoins the stately home of Kenwood House and its grounds. The south-east part of the Heath is Parliament Hill, from which the view over London is protected by law.
Running along its eastern perimeter are a chain of ponds – including three open-air public swimming pools – which were originally reservoirs for drinking water from the River Fleet. The Heath is a Site of Metropolitan Importance for Nature Conservation, and part of Kenwood is a Site of Special Scientific Interest. Lakeside concerts are held there in summer. The Heath is managed by the City of London Corporation, and lies mostly within the London Borough of Camden with the adjoining Hampstead Heath Extension and Golders Hill Park in the London Borough of Barnet.