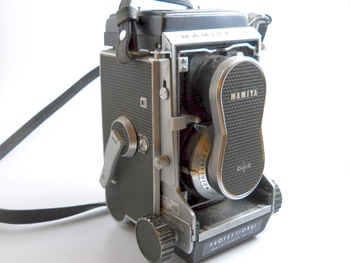 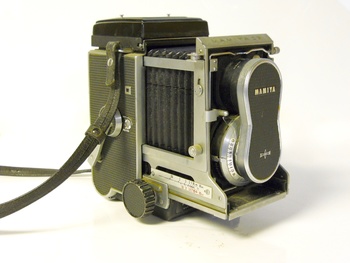 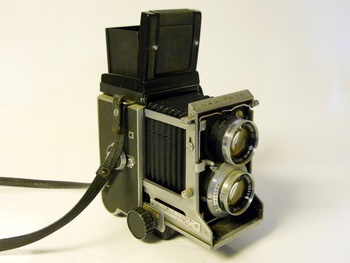 Good Morning CW Members--- 1:00 AM)2016-10-2
I found this Camera at the Salvation Army last week $7.99 it's a steal, Mamiya C3, Professional, i am not a camera collector, but being a photograph myself and i've work with manual camera before, I do recognize a high quality camera, this one have everything the professional photograph need, including interchangeable lens and precise focusing.
After checking some features very important on a camera, i come to the conclusion, this beauty from the 60s are in pristine condition, other then cleaning, everything seem to work perfectly, i did't check with a roll of 120 film, but i will try this monster for sure.

The Mamiya C series is a professional-level series of twin lens reflex medium format cameras made in Japan. It was the third series of TLR cameras made by the company.
Mamiya began to produce 6x6 twin lens reflex cameras from the late 1940s the first, now very rare, was a conventional design. In the early 1950's A and B series TLR cameras were also based on fixed lens designs. This was quickly followed by the C series which began in 1956 starting with the Mamiyaflex C. It broke away from the traditional TLR designs used by many different manufacturers. One notable distinction of the C series is the fact that they can use interchangeable lenses—a feature only found on one other TLR camera, the Koni-Omegaflex.
There were three very significant elements to the design :
It was possible to use interchangeable lenses.
A double extension bellows system of focusing permitted very close focus.
The film path spool to spool was absolutely straight

The C3 was the third development of the C released in 1962 as part of the Mamiya C series of interchangeable lens medium format TLR cameras. The C3 was a major update to the system. It was the version that became popular with amateur and professional photographers and was the foundation for the success of the following models. It improves upon the Mamiyaflex C2 by having a winding crank instead of the knob design. It was replaced with the Mamiya C33 in 1965.
Upon release of the camera a new series of chrome lenses was introduced. These are different from the previous versions as the shutter has been changed to the Seikosha-S type. It now supports a maximum shutter speed of 1/500 of a sec. with modern speed stops of 1, 1/2, 1/4, 1/8, 1/30, 1/60, 1/125, 1/250, and 1/500.
Compared to the previous C2, the lens lock is now located on the left hand side of the body. Within the lens lock is a reminder window to select ASA speed. The lock hinge is now on the right side. The cable release socked is relocated from the center to the top of the release slider. The film counter now has a dedicated window on the right hand side of the body. Multi-exposure is a new feature that can be controlled with a knob located by the advance crank. The right side has depth of field distance scales for 65mm and 80mm lenses. The left side has additional distance scales as well as an exposure correction scale. Starting with the C3 model until the release of the C330, leatherette was not used for the covering. Instead a proprietary Mamiya covering is used with a tiny raised letter 'M'.

Similar to the previous Mamiyaflex A and B models, it features a automatic film advance, so it does not require the use of backing paper markings on the film for exposure counting. The advance is in the form of a lockable knob on the right hand side of the body. The film compartment is a bit different compared to many other TLR cameras. The film path is straight without a 90 degree bend. Like most TLR's the film is on the bottom spool and the take up reel is on the top spool. Loading the film require aligning the start indicator on the film to the body.