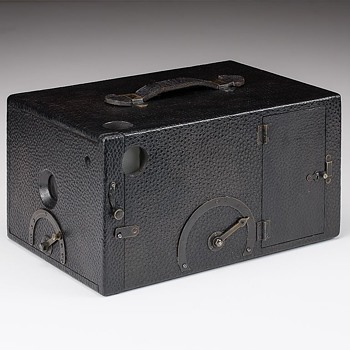 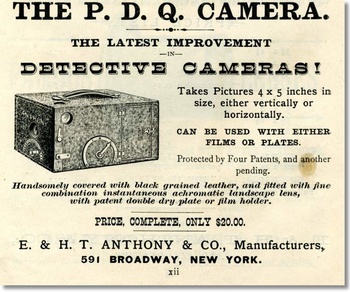 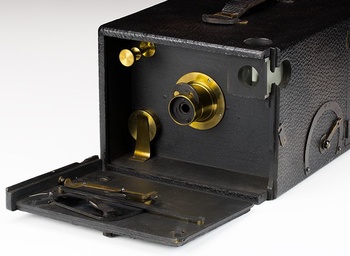 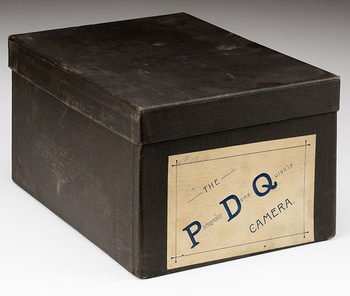 Oh my, a leather-covered box camera in my collection? Although I’m not particularly fond of solid-body (box form) cameras-especially leather covered models-a few pique my interest because of their strangeness and historic relevance. Besides, this P.D.Q. Camera is in excellent condition and includes its rarely seen, cloth covered cardboard box with paper label. (Serial numbers on the camera match the box.)

Since the invention of photography, camera makers looked for ways to simplify the picture taking process. In many cases, it was through technology advancements, such as the invention of flexible roll film, which pushed things along. One of the great milestones of photography was George Eastman’s 1888 original Kodak Camera, a longish rectangular leather covered box, factory loaded with 100 exposure roll film. Attracting a hugely untapped amateur market was the basis of Eastman’s landmark achievement and its famous slogan: “You Press The Button, We Do The Rest”. It worked!

At roughly the same time, so-called ‘detective’ cameras were gaining popularity. It was Thomas Bolas who first suggested the detective camera concept in 1880 and made a camera in 1881. Detective cameras, basically a box with a hole for the lens in front, were quite popular yet awkward to operate. Although a detective could be used in the "hand" or removed from the box for use on a "stand," the process of picture taking was quite involved - having to compose and focus on a ground glass, set the shutter, and manipulate plate holders and dark slides.

Which brings me to this rather humdrum P.D.Q. Camera by the well known American maker E. & H.T. Anthony. As a detective camera, it’s not much to look at: Then again that’s exactly the point. Ideally, detective cameras should be inconspicuous. While some concealed cameras were quite elaborate, simple box forms were the most popular (also refer to my CW posts of polished wood detectives such as the Fallowfield Facile, Scovill Antique Oak, and Blair Hawkeye).

On December 28, 1889, the 4 x 5 inch format P.D.Q. Camera was introduced as a “beautiful Christmas present”. Similar to George Eastman’s plan, E. & H.T. Anthony wanted to sell this detective as something that worked easily and speedily. The company coined a slogan: “Photography Done Quickly”. In its early advertising, E. & H.T. Anthony wrote:

“The P.D.Q. Camera is a detective which accomplishes the objective for which it was made and bears out its name, the initials only of which, we adopted as a distinguishing title. Photography Done Quickly with this camera is also done well, and with the least possible effort or loss of time, patience, or temper.”

That’s a lofty statement but in reality the camera was probably a clunker to use. Dry plates had to be loaded in holders (while in a darkroom); focusing was somewhat guesswork when using the radial dial on the camera’s side; each picture required the plate holder to be switched, and so forth. Even the viewfinder had to be removed from the body (after taking off the front panel) and repositioned to change from landscape to portrait picture orientations. All that fussing around wasn’t very inconspicuous if you think about it.

Yet the P.D.Q. also had the ability for more precise picture taking and time-exposures by removing the back and composing scenes on an internal ground glass.

“A new and valuable feature is the rear compartment of the camera, the cover of which may be removed, when there will be found a ground glass, which is also removable, and which renders the camera where time exposures are required. A tripod screw and cap for lens, which also accompany the P.D.Q., complete its equipment for such work, and the entire camera is neatly covered in black grained leather.”

Anyhow, this P.D.Q. looks great and still works perfectly after 125+ years! The multispeed sector shutter is set using the radial lever on the front panel. A second radial lever on the side of the camera adjusts the focus. The Anthony brass bound, instantaneous achromatic landscape lens throws a decent image on the ground glass. (At some point I might load a plate holder and take some pictures.)

Given its somewhat cumbersome design, relatively high price, and competition from easier to use magazine and roll film box cameras, the $20.00 P.D.Q. (price reduced to $17.50 in 1891 after barely one year on the market) had a relatively short life and disappeared from 1892 catalogues. Anthony had other box cameras with much longer life-spans, which makes this a somewhat rare camera.