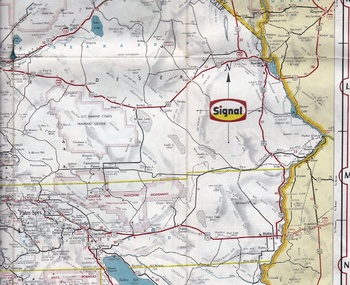 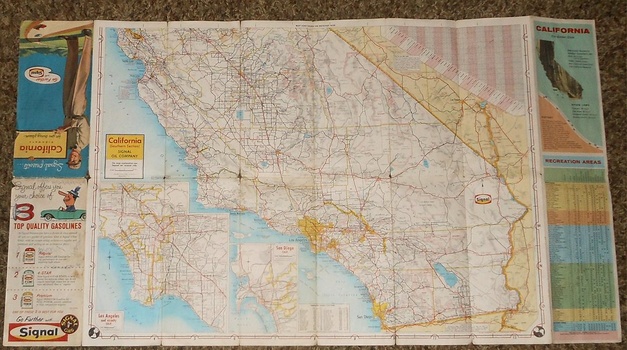 Something I found on my road trip from a couple weeks ago. It's a map of California made by the Signal Oil Company from 1964.
The graphics on it are great. Way better than the cover from my Auto Club map. Yes I still use maps. Although I think I will finally break down and subscribe to the GPS service. Would come in handy when looking for antique malls. I look for antique malls now and then. I know, it is hard to believe.
I actually had to use this map at one point. Took a wrong turn trying to find Highway 1 at Lompoc and luckily Highway 1 hasn't changed since 1964.
What was still around in 1964 was Route 66 although it was starting to fade. A lot of the now ghost towns along Route 66 were alive back then. Amboy was going good although Oro Grande had been bypassed by I15. The old alignment of Route 66 was more level. I40 and I15 are shorter but go over some steep hills. You can see Route 66 above the Signal Logo in photo #3.
Photo #4 shows Southern and Central California which is pretty much my stomping grounds. Also I go to places around there. Especially antique malls.