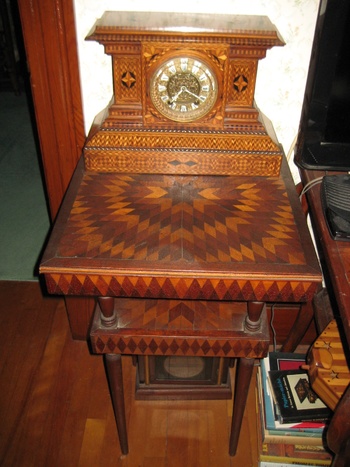 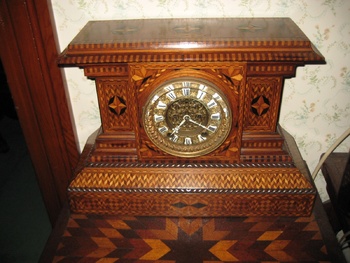 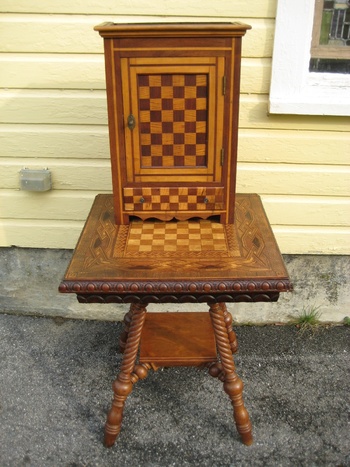 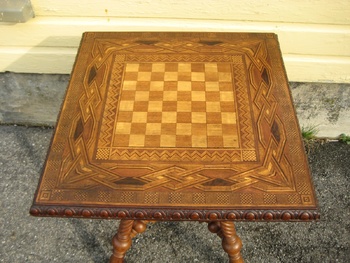 As previously mentioned, I really like and seek folk marquetry/parquetry objects. I'm always amazed at the variety of items that were produced. Often their production required much time and effort...and the pieces are most often never signed!

Some months ago, I posted a folk parquetry mandolin. I thought that I would share a few more pieces from my collection.

The first 2 pictures show a "scratch" made self clock and stand.

I feel that the clock is a tour de force of this artistic medium. It is in the form of a common shelf clock manufactured by most of the major CT clock companies of the late 19th-early 20th century referred to by modern collectors as a "black mantel" as they were often made of dark painted wood I suppose to imitate marble (actually slate) cased clocks of similar form. See the book "American Folk Marquetry: Masterpieces in Wood" by Richard Muhlberger. It is based upon the wonderful exhibit held in the 1990's at the Museum of American Folk Art in NYC. See page 98, plate 83 for a similarly inspired clock. I like the rather fancy dial with the open escapement of my clock.

Folk marquetry/parquetry has been referred to as "male quilting". Well, the "Star of Bethlehem" pattern of the table's top and lower shelf is a traditional quilting motif, too. Guess that supports that assertion?

The next pictures show a "scratch made" folk marquetry table top cabinet with a door and drawer sitting atop a table with a rather wonderful game board. I believe that the table probably started life as a factory made oak stand (nice 1/4 sawn oak was used) and someone went to town with the top! Note the miniature checker boards which form the border of the table top.

I wish I could post more pix of the details, but I've reached the limit.