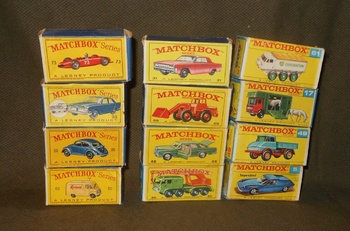 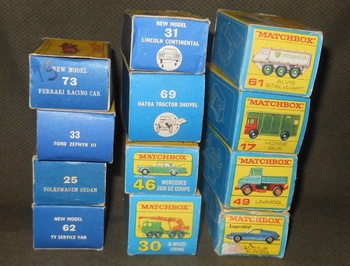 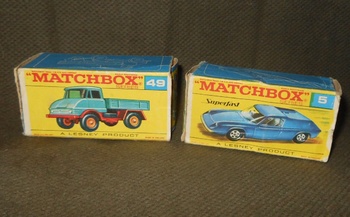 Finally Matchbox box school as promised. I only have the D,E and F style boxes. I'll run into the earlier boxes eventually, the cost of the boxes tends to go up logarithmically as one goes back in time. As sales increased they made many more. Hundreds of millions made in 1968. Not so many in 1958.
On with the lesson. First row on the left are D style boxes. D style boxes have the layout MATCHBOX Series. The ends of the boxes have no picture of the model on the end flap. These were made from 1961-1967. Rather uncommon in 1968 just models about to be discontinued would still have D style Box. These also have a darker blue color than later boxes. "New Model" on the end flaps for those being introduced that year.
The middle row is E style boxes. "Series" is now below MATCHBOX. These were used from 1964-1968. Note there is an overlap from D-E boxes. Depends on how many boxes they printed. Also early E styles were the darker blue. See the box on the left compared to the box next to it.
There was an E1 box with no picture on the end flap, no example here. There are two E2 boxes with the circle picture. The E3 has the full color picture on the end flap.F style boxes first appeared in 1968 although I think the E box was more common that year.
Wrapping it up is the F style box from 1968-1969 (or perhaps 1970). MATCHBOX straight across the top with a larger picture on the front and end caps. Also the top and bottom of the box showed the special features of the models.
In the last photo is a transitional F box from the later half of 1969. There are other transitional boxes that just say Superfast with no speed streaks.
Matchbox box study is not an exact science but this should be a fairly good guide.