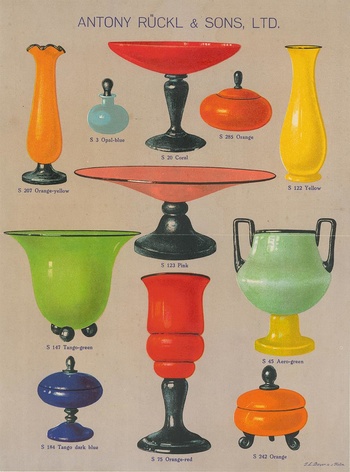 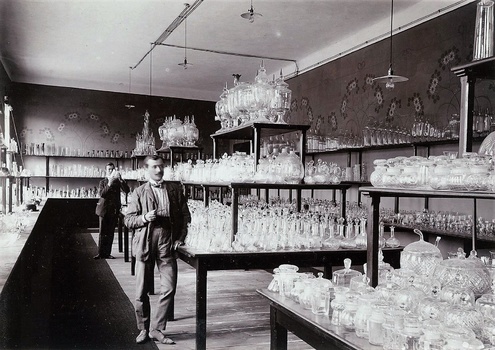 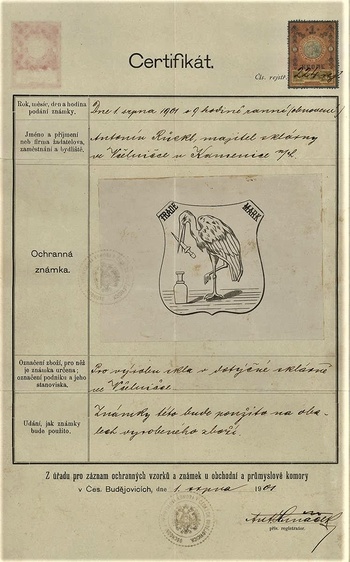 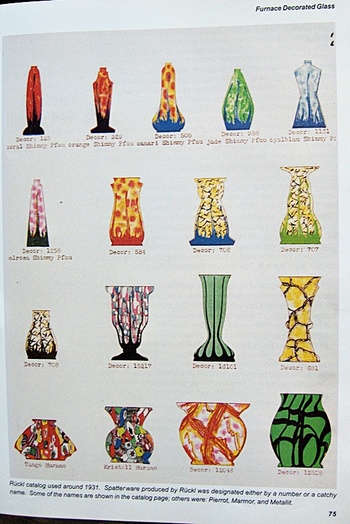 As a few of you are aware, I have been working and have published a Ruckl website since 2015, and have added the more obscure Kralik glass series which were the export glass made for a wide and substantial distribution during late 1920s early 1930s, as the Butler Brothers catalogs document.

I recently came across new information about their glass production and why we don't have any indication that Ruckl made decorative glass before WWI. At the time they had three glass plants: Nizbor, Svelnicka and Skalice near Ceska Lipa and Novy Bor.

They first focused on glass made for medicinal purposes, as well as other types of industrial utilitarian glass, this explains their first registered trademark in 1903, the crane holding a medicine bottle's top, while the bottle itself is sitting on the floor beside it.

After WWI we have several documents dating 1925 to 1928 (image 1 and 4), which involved a new line of decorative Tango glass advertisement, and a page of decors and shapes which shows their most recognisable satin shimmy pfau decors in various glass colors.

The tango glass was initiated in the Skalice plant. In Nizbor they focused on clear crystal pieces, mostly cut. Then the Svelnicka plant was the producer of a unique deep translucent red glass, a formula which they kept secret. This glass was also cut in the traditional Bohemian manner, as well as enamel decorated.

There is also a religious component to some of their products, I would venture the red glass from Svelnicka would have been used. They were Catholic, and contracted with the Church to provide they needed glassware accessories.

For today's collectors of Bohemian and Czech glass, it was a mystery why Ruckl did not have a presence in the early 20th century decorative glass and crystal market. This information answers that question, and also explains why they were not as well known, or recognised or valued as much, when they changed their focus and direction during the Art Deco period.

Today they are thriving under a new ownership consortium. They won the country's National prize for best design in 2017 in decorative glass, and are also involved in a new retail venture with Ruckl glass and crystal boutiques, their flag ship store is in Prague.

Images used with permission of the current Ruckl Family and Company and Deborah Truitt.