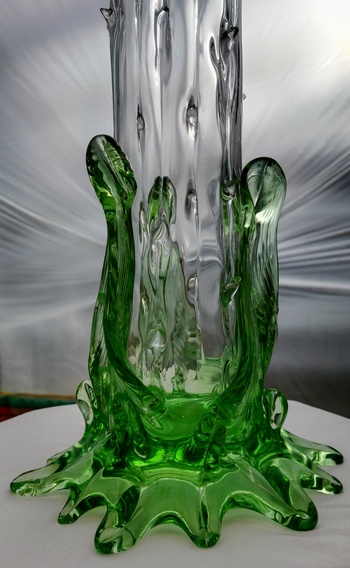 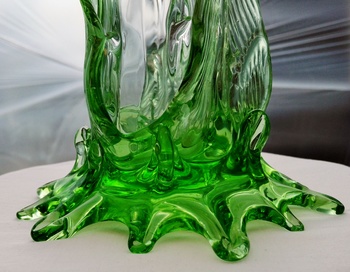 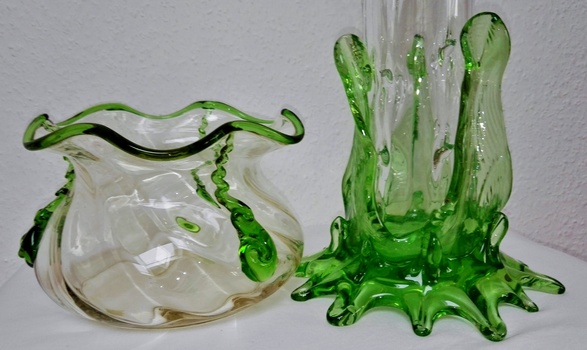 It is well documented, that Loetz produced thorny tube vases arround the 1890's. This large vase measures H=51.0 cm, Do=8.0 and Du=17.5 cm. The hexagonal tube, made of clear glass, carries pulled out thorns along the sharp edges. The artfull foot is attached by three twisted leaves and supported by nine teardrops, it spreads out into 12 roots. The last foto shows this vase together with a Loetz bowl of PN=II/6179 (1908) 'Kristall diagonally rolled with applied rim and three drops', H=12 D=17 cm, produced about fiveteen years later. Loetz made nearly all coloured glass cones by itself, the composition of each colour was written down in the so called 'Receipe' book, similarly to the very well known 'Design' book the 'Production Numbers' refer to. The 'PN' of the tube vase did not survive, but obviously both vases are decorated by the same 'Yellow Green' glass, one of the 22 known different green Loetz colours, most often used were 'Creta-, Olympia-, Moss-, Leafe-, Russian- and Yellow-Green'. The mighty foot of the thorny tube vase exceeds the hight of the bowl in foto 4 by more then 5 cm and it has almost the same diameter.