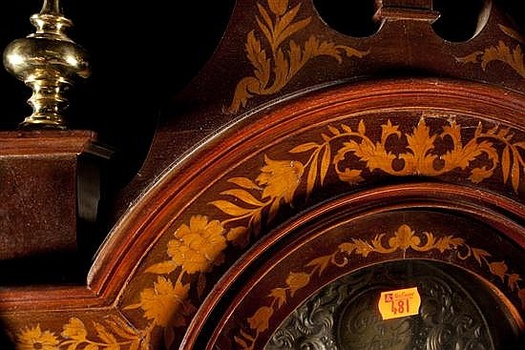 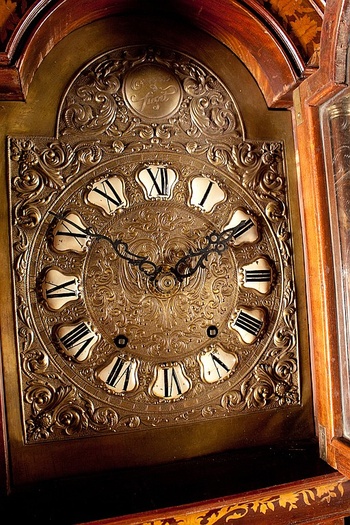 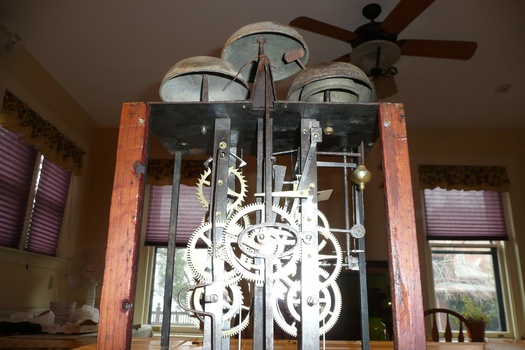 We believe that this clock is from the 1940s or 50s with a genuine antique French Morbier 4-Bell Quarterly Strike.

In the first half of the 20th Century there was a huge revival of interest in antique
clocks of all kinds, especially after the publication of Wallace Nutting’s
The Clock Book, the 2nd edition of which came out in 1935.

Some cabinet makers responded to this interest by making period cases and
fitting them with either new or antique movements. Antique Morbiers,
which had been made in huge quantities over a long period were ideal candidates for fitting
into higher quality, handmade cases.

Even the huge American clock
manufacturers like Seth Thomas, contributed to the flurry of reproductions:
their “Tradition” line from the 1950s and 60s are dead ringers for the pillar
and scroll cases that housed their very first clocks.

Our Tall Case Clock, which we've named "Dutch", with its carefully-fitted antique movement and its artisan case, is a good representative of this era.

At 15 minutes past the hour, it strikes a sequence of three cup bells; at 30 minutes it strikes the three-bell sequence twice and three times at a quarter till the hour. At the top of the hour it strikes the number of hours on the largest of four cup bells and repeats the strike about 3 minutes later in case you missed it the first time. This repeat of the hourly strike is characteristic of Morbier Movements.

We hope that you have enjoyed meeting "Dutch".