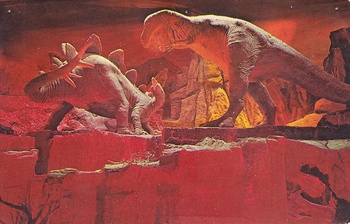 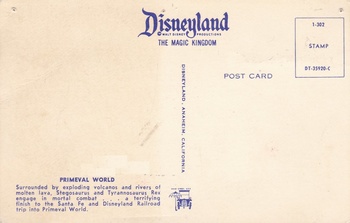 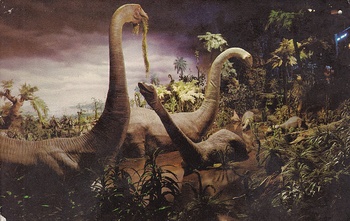 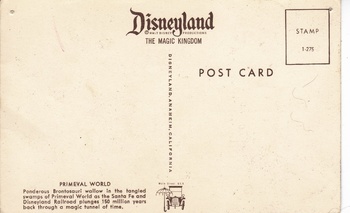 Back the 1970s I used to collect postcards. Most are long gone as they were tossed out (not by me) but I did save a few. We went to Disneyland fairly often as in once a year at least. So it is hard to nail down when I bought these.
The Disneyland Railroad goes around the park and near the end of the loop is the Grand Canyon and Primeval World which makes the ride worthwhile. It only takes a couple minutes to get through the Primeval World section but it is quite well done. Would be nice if they would expand it like the Pirates of the Caribbean or Haunted Mansion. Still there is more than seen here.
In postcard #1 Tyrannosaurus battles Stegosaurus despite the fact that they were millions of years apart. Still looks good.
#2 is Brontosaurus (yes I know of the new inferior name). Back then it was thought the sauropods lived in lakes and rivers to support their body weight. Now dry land is thought to be where they dwelt. That and the tails and necks were fairly stiff and not snaky.
I have a few more postcards should anyone wish to see them.