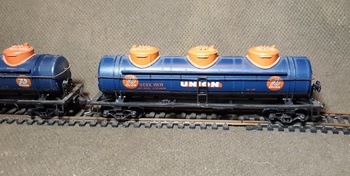 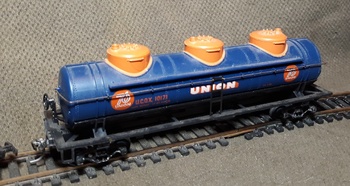 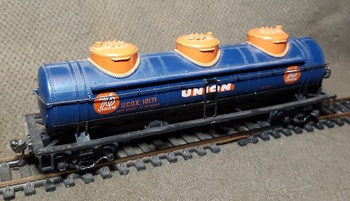 I am working on getting a fleet of these, I think 10 would be a good amount. A real train might have 20-50 of them. The typical HO train set came with a mix of freight cars. Oil car, box car, ore car, flat car and so on but an actual freight train will large amounts of the same kind of car. There are mixed freight too but would still have large amounts of the same type of car. Oil cars are owned by the oil companies so they would all be the same type and company.
Now I don't know about everyone else but I think these triple dome cars with the blue and orange paint scheme are the coolest. Current tank cars are domeless and single dome tanks were the norm since the 1950s so I am thinking 1940s/50s on these for the real ones.
As for when the models were made the one on the left (fig 4) is 1970s or so and the one featured in most of the photos is circa 1990 (plus or minus a decade) as it has the more realistic Kaydee couplers.
Special thanks to the UP GP9 pulling these.