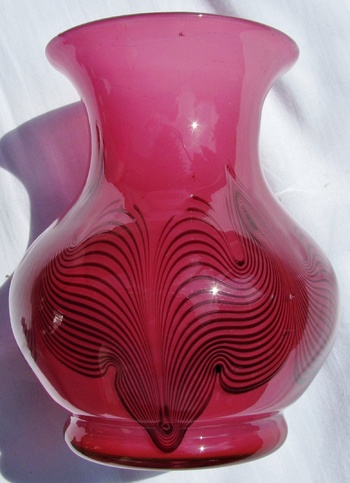 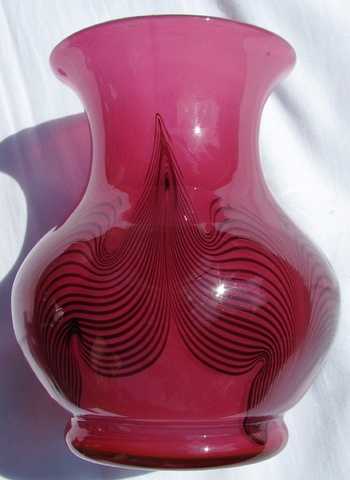 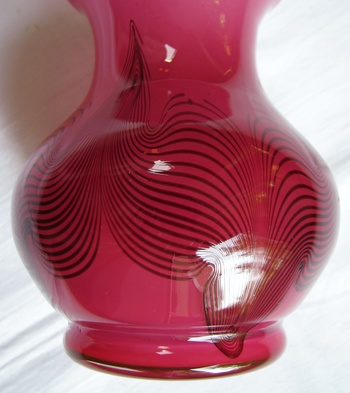 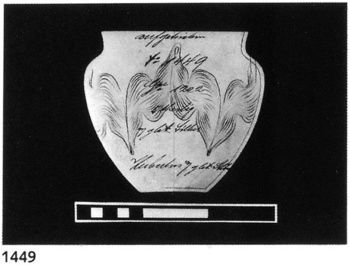 In 1904 Loetz produced a series of vases decorated by a heart shaped leafe décor, the threading of which being alternated pulled up and down in turn. In the last foto of Musterschnitt PN=II/1449 (1904) a sketch of this décor is shown in the 'Hubertus' 5-fold repeated Gre 1202 - taken from the CD delivered with 'Loetz Boehmisches Glas 1880-1940', Vol II - as a Musterschnitt of Gre 1392 itself is not available there. For the interested reader more PN's are published by Jitka Lnenickova in 'Loetz Series II'. My vase shows the 4-fold repeated décor as described in PN '1398 = 4-theilig / mit Rubin', made of 'Ruby' pulled threads over clear iridized crystal glass with a pink opal inner case, weakly speading downwards to a nearly invisible light blue shade. Most of the vases in this 1904 series are produced in the 'Hubertus' and/or 'Lucifer' execution, some are made by using 'Titania' and other PN's bear no detailed décor descriptions at all. The glass combination of my vase is not explicitly mentioned, but the fine 'Ruby' threading of the repeated heart shaped leafes make Gre 1398 as described in the PN's II/1398-II/1402 very reasonable. The shape of my vase is PN=II/773, 'alt' PN=I/7989, it stands 13 cm high, the largest diameter is 9.5 cm and it shows a nice polished pontil.