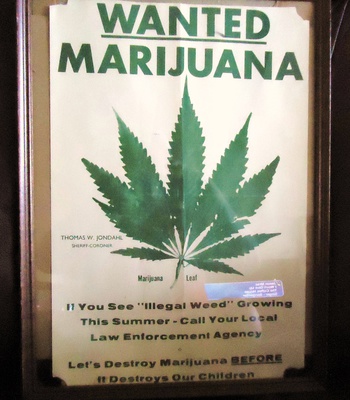 I was a crisis worker in Mendocino County Ca. This is big part of the Iron Triangle, area for growing marijuana. Sheriff Tomas Jondahl 1974-1983 tried to stop people from growing pot. This poster he put up on telephone poles and all over the county. LETS DESTROY MARIJUANA BEFORE IT DESTROYS OUR CHILDREN These were torn down within minutes after they were put up! I was on a crisis call, going to a hospital in another town to evaluate a suicidal teenager and saw this poster and stopped the county car and pulled it off the telephone pole! It is probably the only one left as they were destroyed soon after they were put up. The only money in this county is pot, wine, and some pears. Almost all lumber mills have shut down. Time has passed and now if you grow on your own land, they look the other way mostly. It is very wrong to grow on State Park land or any Public land. Soon it will be legal like Colorado. Medical Marijuana is legal, Someday even the VA Hosp. will give it to PTSD patients and others for pain! TODAY'S HEADLINES IN PAPER:
Feds subpoena Mendocino County pot records, Feds mum on Mendocino County pot investigation, Mendocino D.A. says medical pot growers should tag plants, Mendocino County: Feds threatened ETC.!