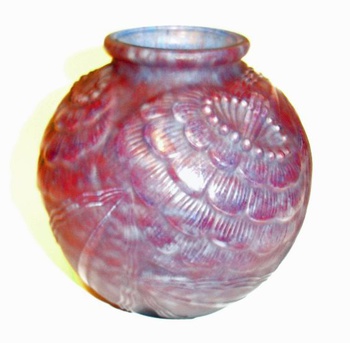 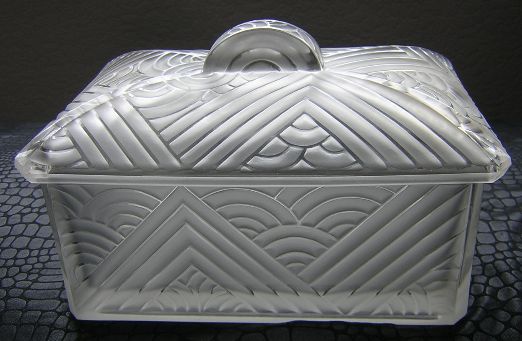 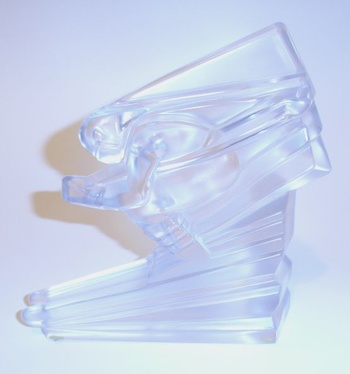 Thanks for all the kind comments on this series, as before, I should stress these are only my personal opinion of the great glass ‘unsung heroes’.

Pierre D’Avesn was, I guess, what you’d call the ‘non du verre’ of Pierre Girre. He was born in 1901 and died around 1984. By moving around, he effectively bridged the whole gambit of 20th century French Glassmaking. He was essentially a sculptor and at the age of 14 went to work for Rene Lalique. Lalique at this time was experimenting with mould blown glass. Although later, moulded glass became a down market product (as it could be cheaply produced) at this time it was seen as a sophisticated new technique allowing more complex and finer sculptural glass making. What D’Avesn learnt from Lalique clearly served him well for the rest of his long career.

D’Avesn worked for Lalique for around 11 years and supposedly designed some of the great Lalique vases. Unfortunately the house rule was ‘every design was a Rene Lalique design’ so nothing could bear the name D’Avesn. Pierre then moved to Daum, not long after the 1925 Paris exhibition, to run a subsidiary company for Daum called ‘Verrier
D'Art Lorrain’. The ‘Lorrain’ business seems to be a deliberate ploy by Daum to cash in on the amazing Lalique phenomenon. They basically used the new mould blown technology to make cheap Lalique look-a-likes and, strangely, cheaper versions of their own high end glass. It seems D’Avesn had learnt one important lesson though; he made a deal that, when he designed something, examples usually bore his name, not ‘Lorrain’ and often they were far better quality that the company’s usual fare.

When the financial crises hit France, in order to survive, Daum closed almost all of it many subsidiaries. So D’Avesn was on the move again. Next, around 1937, he worked for Verlys, one of Frances better Opalescent glass makers. Verlys too were in the Lalique- look a-like-market. Success in this now big market seemed to depend on a company’s sculptural abilities and their ability to make good opalescent glass. They must have been pleased to get such an expert. Inevitably, alas, War intervened.

After the War, D’Avesn went to work for Croisy-le-Roi. They operated an interesting business model; they made mould blown opalescent glass for anyone who wanted their own designs turned into glass sculptures and vases etc. In the 1930s they had made all the glass for companies like A. Hunebelle, Ferjac, Cesari and probably Etling. By the end of the 1940s, Croisy-le-Roi was owned by Sevres, and many of their old corporate customers were long gone, leaving Croisy-le-Roi with the moulds. D’Avesn was employed to run the potentially ‘cash-cow’ business of continuing to use the old moulds and sell wares. D’Avesn was clearly none too happy, as he saw himself and as designer and sculptor, not a factory manager/salesman. Worst still he learnt, Sevres planned to embark on a range of new sculptural glass in the modern style without his input. Never deterred D’Avesn managed to persuade them otherwise and, as well as running the old style glassworks, he became their major designer for the new range. These were signed Sevres, but one mark was reserved for only his designs!

Amazingly in the 1980s, in his 80s, he was still designing for Sevres and Vannes-le-Chalet.

As D’Avesn, after Lalique, persuaded his employers to let him sign his work, it is sometimes hard to tell which of his companies actually made a piece signed P D’Avesn. Also, throughout his life, he was a major exponent of Art deco style, so it is quite hard to date pieces.

Picture 2: Is hard to date too, it’s a clear and frosted, giant cigar box, signed P D’Avesn. It’s a size and shape difficult to achieve with a complex pattern. About the only other person to attempt such pieces was Rene Lalique and if this had been by him, it would be worth a small fortune.

Picture 3: An amazing modern looking (probably designed c1949) sculpture ‘The Skier’, but with more than a touch of Art deco, made by Sevres and signed with the mark only used on P D’Avesn designs. I think this may be part of a series, I’ve also seen a Cyclist. It is even possible they were meant as sporting trophies.

Next time: The man who was nearly never known.