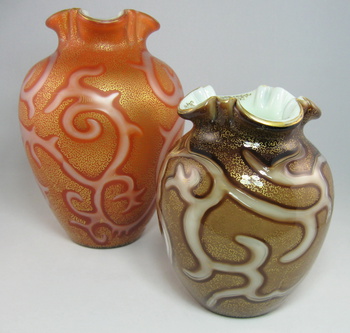 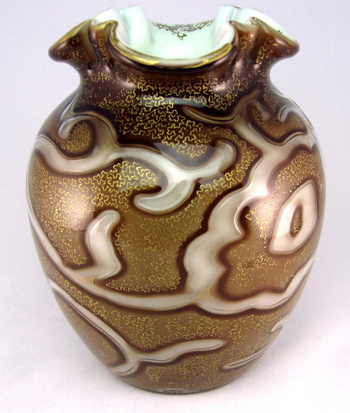 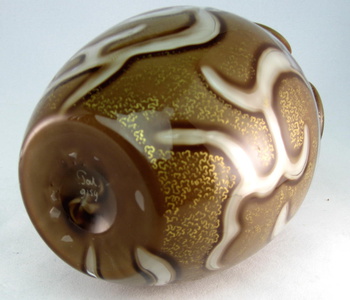 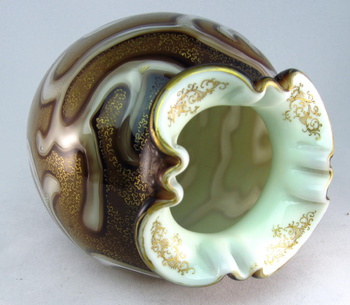 I have been wanting one of these since I first started collecting Loetz, which was around the year 2000. Back then they would show up fairly often. In perfect condition they went for a lot. But more often than not, they had bruises. The airtrap portions of the vase are easily damaged. I was even willing to buy a damaged one so I could better afford it, but even those sold for $500-$600, which at the time I was not willing to pay. Then there was a long spell of 10 years, during which I never saw them on eBay. In the past month, 4 have appeared, and I think I chose the best one. It is a manageable size, 6 1/4" tall, 4 3/4" wide. Delicate gold enamel embellishment on the folded down parts of the rim, and the extremely fine meandering lines that cover the brown areas. Small pontil area, marked with enamel "Pat 9159". It is similar to some forms I saw in the musterschnitte in Series I, but not close enough to assign it a number. From around 1888, I believe. Some of the references mention "Victoria" as another name for this decor. It was made in a lighter and darker brown, as well as a very rare turquoise.

I just added another photo to compare my brown one to the salmon pink one I just purchased. That one is a full 8 inches tall, with a matte finish and marked "Patent" on the polished pontil.