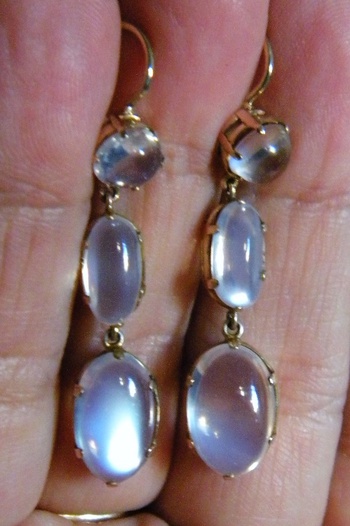 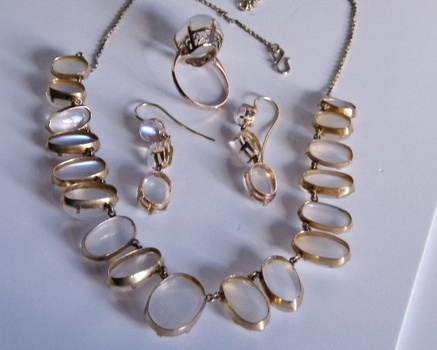 This is the other set I was saving for my other Daughter. I purposely bought 2 Moonstone sets so there won't be a fight. This was bought from a private party and this was a buy it now on eBay. Many years ago :0 . The funny story to this set is that I found it when I did not have money at all. I was so in love with this set. This was my very first Antique Moonstone set that I ever purchased. The set is not hallmarked at all! I believe its Victorian in age.
As the story goes I saw this set online and wanted it so bad that I did the buy it now on total impulse. Then worried about how to pay for it the a minute after! I had $130 in PayPal and this set was a lot more than that! I saw that the Seller was in Santa Monica(close by) and frantically emailed asking to make a deal:)) So the Seller was so kind as to meet me...and I came with some pieces that he might be interested in for a possible trade in lou of a money. OMG I was so nervous!! As it turned out I traded some gold pieces and a little silver for the set and $125 in PayPal. WOW that was a crazy thing I did! CARPE-DIEM is my motto...and I have learned on faith to believe that in life if I see something that speaks to me(Humans or object)....I approach and befriend or get it no matter what! And believe all will work out somehow!!! Nothing happens by accident.........L